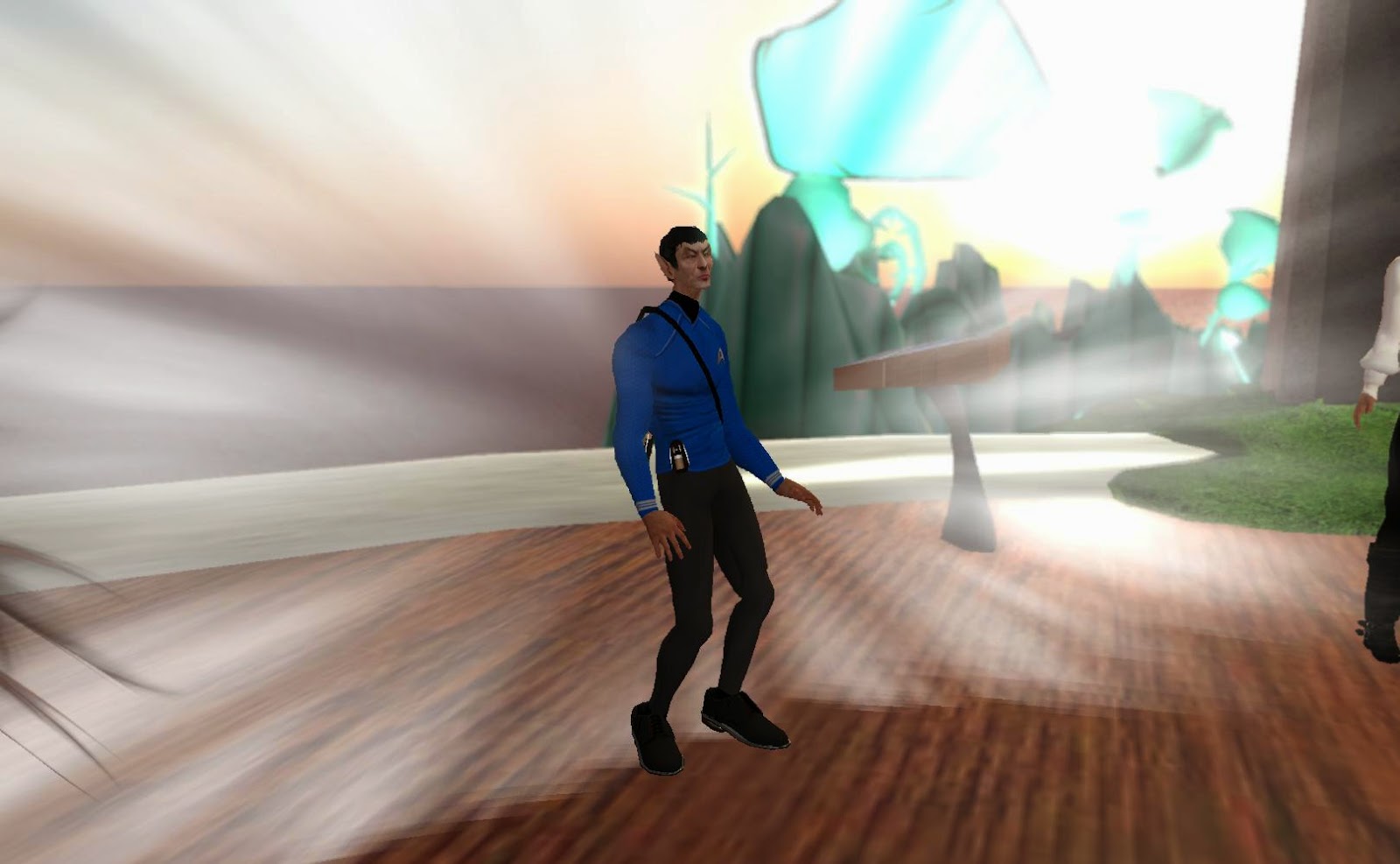 On Friday February 27 came some sad news for science fiction fans. Leonard Nimoy, known for his role as "Spock" in Star Trek died of lung disease at the age of 83. It was both the loss of a great actor, and a reminder of how long ago the groundbreaking sci-fi show was, which first aired from 1966 to 1969. Although he took on a number of other acting roles, as well as taking a hand at directing, he was best known for his iconic unemotional and stoic character.

He was honored in large ways and small. There were many comments on Facebook about him. At a One Billion Rising event on Saturday, Stranger Nightfire made an appearance in a Spock avatar. The Furry Fashion club had scheduled a space-themed event that night. Over chat, people talked about Leonard Nimoy and Star Trek. No doubt this was the case over a few other Second Life clubx. 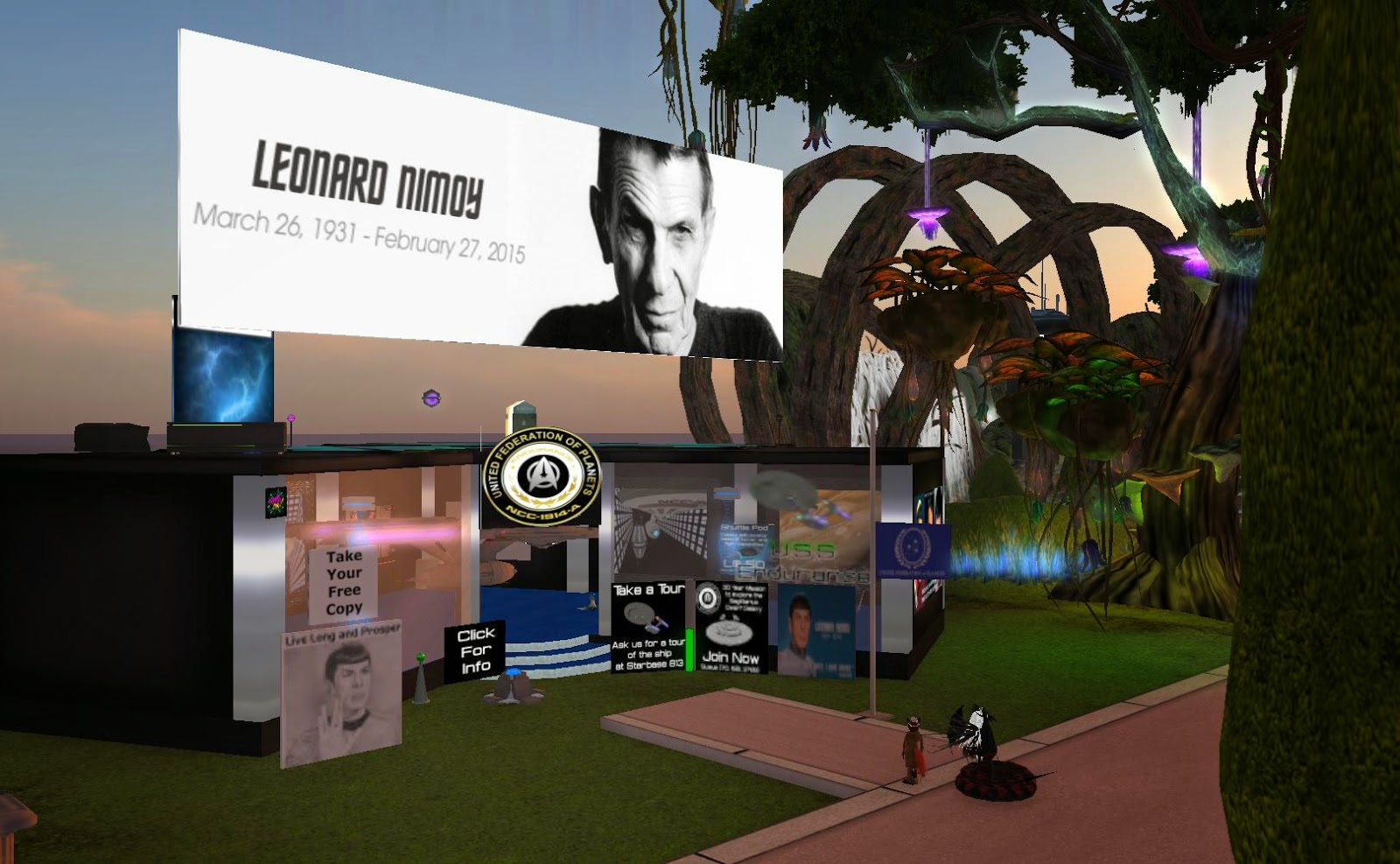 The Second Life Science Fiction Convention was going on when Nimoy passed on. Many exhibits had an "In Memorandum: Leonard Nimoy 1931-2015" sign. For Trek-themed exhibits, they often did more, putting up a larger picture, or more of them for the Original Series character.

Then there was the Star Trek Museum at New Eridani (133, 77, 35). There was one of the In Memorandum signs at the entrance, and another in the T'Karath Sanctuary cavern. Chatting with the curator Wabisabi Matahari, one of the group, Rev. Denes House, had written an eulogy for him.

When Mr. Nimoy first appeared in 1966 as Lt. Cmdr. Spock, the character was brusque, logical, and clearly alien. With his sharply-upswept eyebrows, pointed ears, and slightly green complexion, studio executives were terrified that Bible Belt viewers would react negatively to his vaguely Satanic appearance. So it was a deep shock to find that, as Star Trek became a success, Mr. Nimoy received more than his share of fan mail, often from female fans smitten with his hot-blooded, cool-headed demeanor. 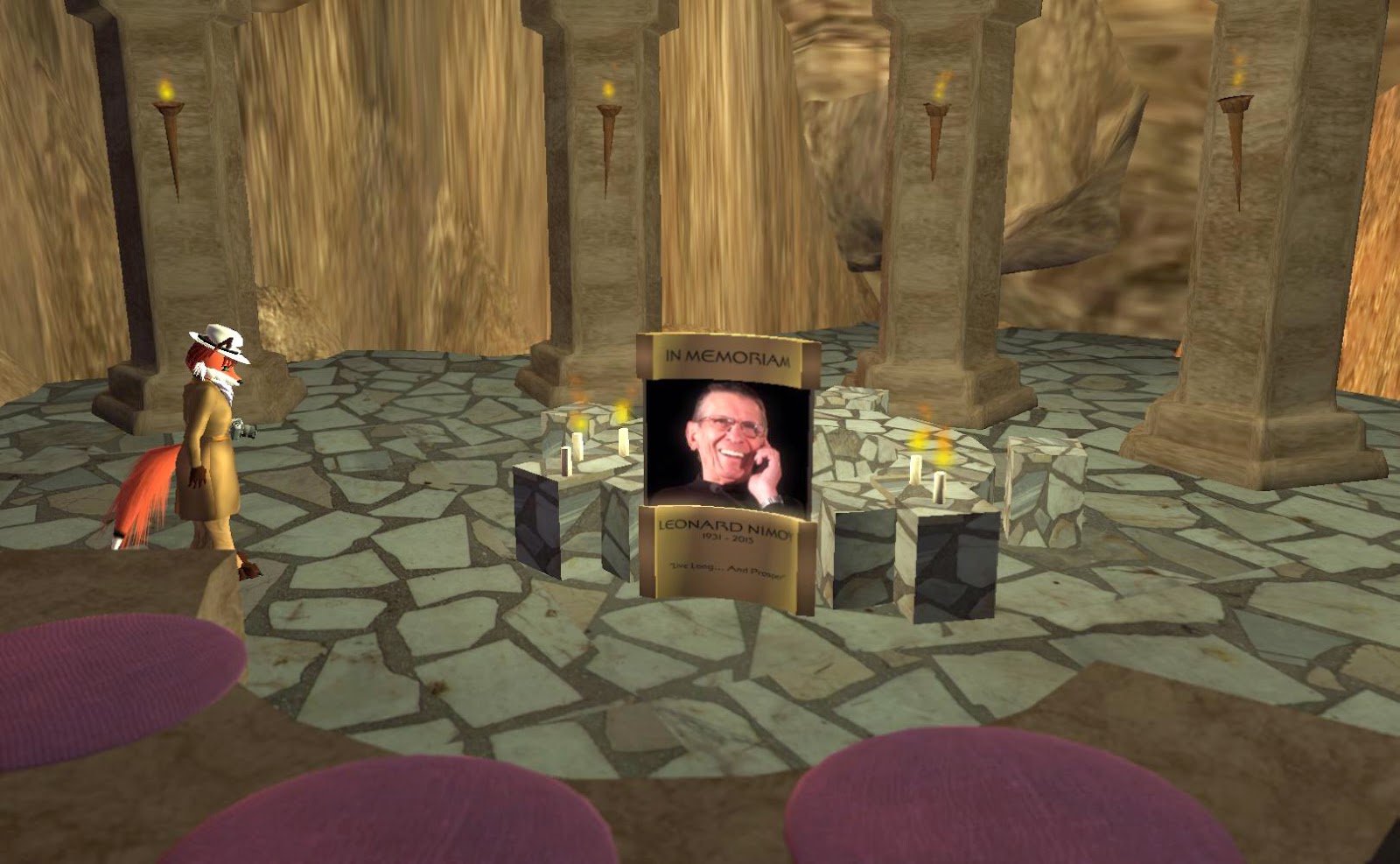 What was it that so drew Star Trek fans to Spock? Perhaps his insistence on logic and reason appealed to an era so riven by emotions. Perhaps through the character's tightly-controlled exterior, fans recognized a heart capable of genuine friendship, loyalty, and sacrifice. Perhaps they just enjoyed his verbal sparring with the irascible Dr. McCoy, played by DeForest Kelley. Whatever the case, by the time the show went off the air in 1969, Mr. Spock had become one of the most popular and most recognized characters in the history of television. 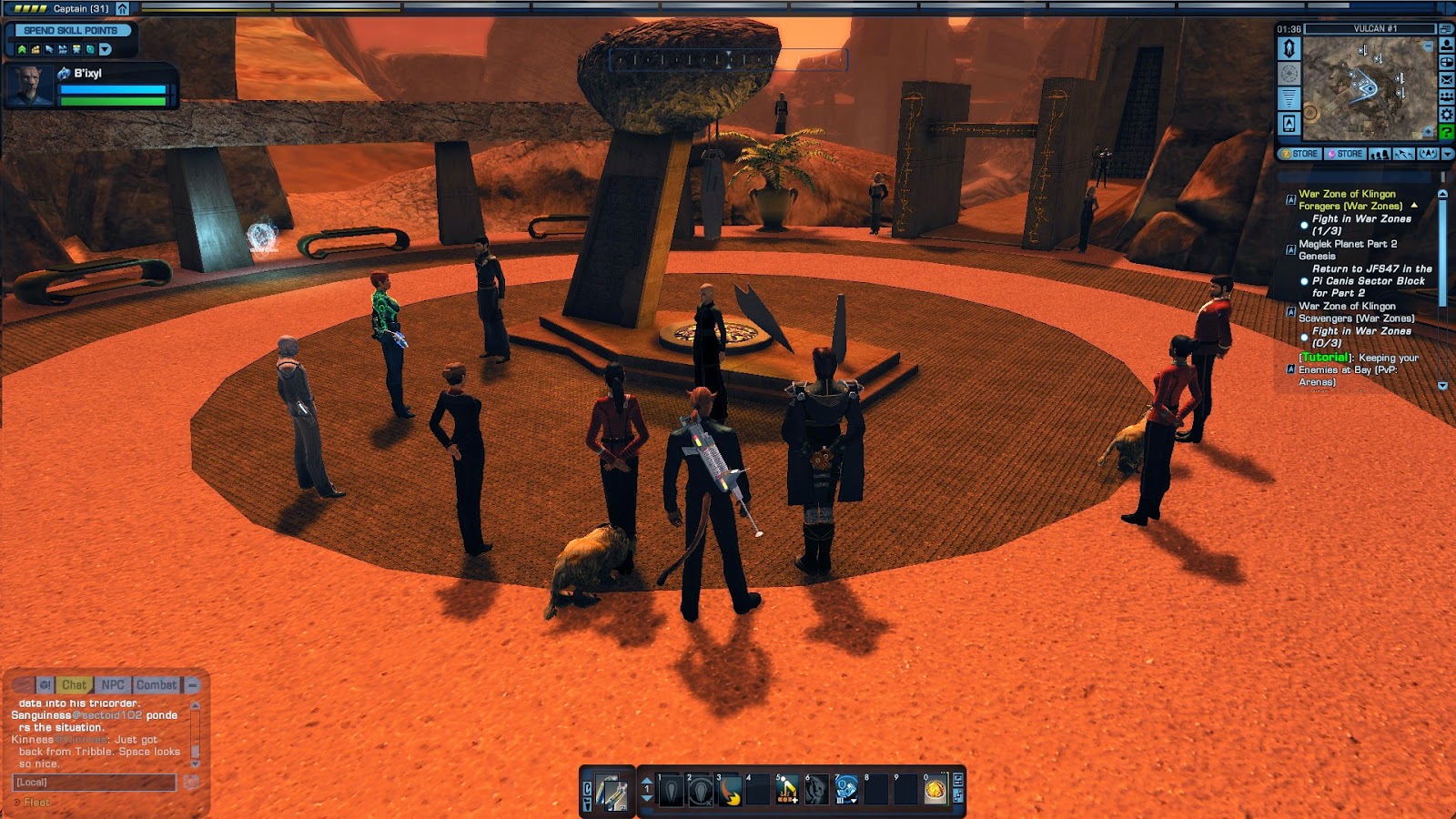 Outside Second Life, Facebook had a great number of people expressing their sadness of Nimoy's passing. Then there was the Multiplayer Online Game Star Trek Online. Cryptic Studios, the owners of the game, made an official statement on the game's website. On the buliten board, there was a long list of posts on the thread about Nimoy.

Deciding to check out the planet Vulcan in the game, when I got there, getting to the town's fountain was a surprise, a few people dancing around, one stripped down to his underwear, with someone having brought out some rainbow light thingy. In the words of one guy, "Did I drop in on a gay club?" One lady Vulcan suggested heading over to the temple area, and several of us did. Once there, we stood there for some moments, reflecting on the man.

The company has reportedly announced plans to set up a permanent in-game memorial to Nimoy on March 5, 2015.

And so, people in Second Life and elsewhere found ways to honor the passing of a great sci-fi actor whom gave fans a character that will be remembered for decades, if not longer.