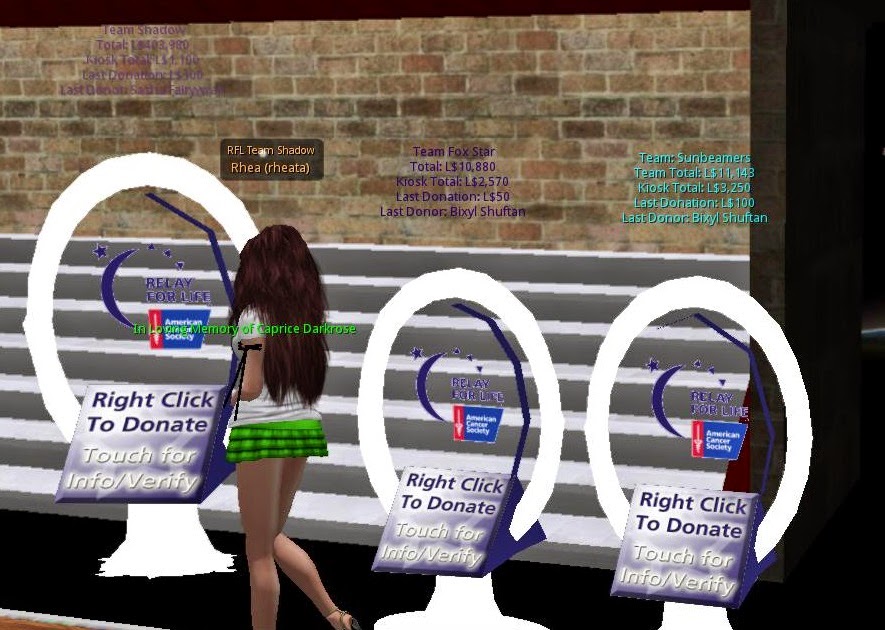 Saturday March 21 was the "Midnight Madness" event for Relay for Life. This was a multiteam event, and the first in which the Sunbeamers, the team of the Newser office's neighbors the Sunweaver Estates, were a part of after the Kickoff weekend. It was hosted by the "Cherubs for a Cure" team.

March Madness RFL Style ""The Tournament you WANT to be eliminated in"" The challenge to have every RFL team ranked to at least Bronze level by the Big Game Day of April 6th!!! First elimination round takes place March 21st from 12 to 10 pm SL time. Come join several RFL teams as they strive to be ""eliminated"" and dance to some great music, have some fun, make some new friends and experience why RFL is ONE TEAM, ONE GOAL and truly is a family!

Besides the Sunbeamers, several other teams, such as Team Fox, took part. Although the teams were supposed to be out once reaching 10,000 Lindens ($40 US Dollars), the Bronze rank level, they (at least several of them) remained up and the donations continued. The Sunbeamers made over 3,000 L that event, and as of Sunday evening, their total is 13,000 ($52 US Dollars).

The Sunbeamers have yet to have an official event of their own, but there's been discussion about "Bid Me" events, themed parties, and an air show.

Although the "beamers," have gone further than some other teams such as Relay Wizards, Lanterns for Life, Too Tough to Die, and Team Caledon, other teams have gone further. The Steelhead Salmons have passed the 60,000 Linden mark. Five teams have already reached the second highest rank, Platinum: Harmony for Hope, Sail 4 Life, Cherubs for a Cure, Unmasking a Cure, and at the top, Goreans for Life. At over 960,000 Lindens ($3,800 US Dollars), they're almost at the highest rank of Sapphire.