Press Release: The Relay for Life Kickoff Weekend, March 7 and 8 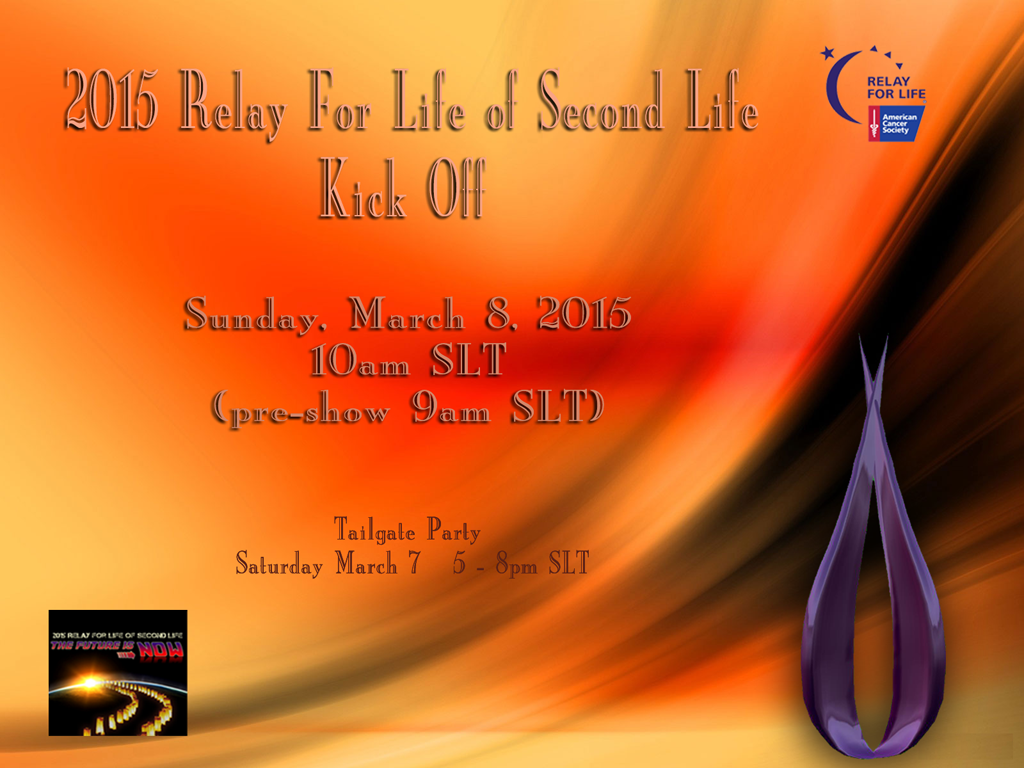 Kick Off Weekend is taking you back to 2005 and the first ever virtual relay! The track and campsites have been recreated and, although we could not recreate the 13 water crossings…. yes 13 !!…. we have done our best to give you the 2005 relay experience. It was a different Second Life back in 2005. But we did not stop there because as you know …. The Future Is Now…..and we invite you to enjoy the kick off ceremonies, followed by musical performances from live musicians and dj’s, at our futuristic entertainment stage.

On Saturday, March 7.. We are holding a combination Paint Second Life Purple wrap up party and a team set up / tail gate party for Kick Off from 5pm – 8pm SLT. Everyone is welcome to attend.

On Sunday March 8 it is the Kick Off Event to Relay For Life of Second Life 2015. Kick Off starts at 9 am slt Sunday, March 8 with a pre-show by T1 Radio, the Official Broadcast Partner of Relay For Life of Second Life. Followed by the kick off celebration which will include speeches by your Planning Committee, the ACS representative StingRay Raymaker and other special guests. Following the official kick off ceremony, let’s have some fun! Live music, dj’s, games, and team campsite areas to visit as you stroll around the track from 2005. A Bring Your Own Kiosk (BYOK) party will run from 5pm – 7pm SLT with Trader’s Time Machine on T1Radio bringing you the best of the 60’s tunes.

The kick off party wraps up 7pm slt, with fireworks at 6:45pm.
Posted by Bixyl Shuftan at 6:00 AM