In Memory of Lavendermist McTeague

In my days hanging out at the STA sim as I was starting out as a journalist, one of the rougher-looking characters there was OtisDriftwood Vollmar. Following the end of the sim, I didn't see him as much, and eventually we lost track of each other.

Fast-forward four years. He was now known as Ote Underwood, and had gotten together with someone else known to visit the STA. Known once as Zola Nightfire, she became known as Lavendermist McTeague. They were happy together for a time. Unfortunetly, tragedy struck, as he announced on his profile:

My partner Lavendermist McTeague passed awayquite suddenly while sleeping Jan 20. 2012 :-(Miss you dearly Kathleen - thank you for these over 4 years. http://www.facebook.com/ote.underwood 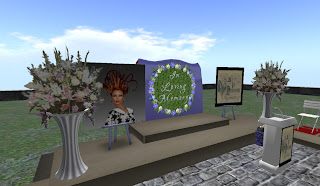 Seeing me online, he asked me to teleport over where he was. There in a skybox next to a now empty house, a small memorial had been set up with Lavendermist's avatar picture, with a few flowers around. The man whom I remembered as a tattooed "gangsta" now sported a scruffy-looking child avatar. People continued to arrive over, mostly women whom were Lavendermist's friends. They soon held an informal wake, chatting about her and their interactions with her, one saying she had chatted with Lavendermist the night before she passed away. 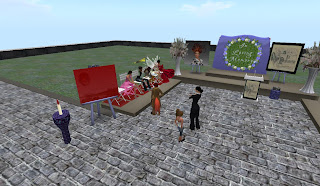 Otis/Ote told me the memorial would still be up at least until this weekend, and invited anyone else whom might have known her to come by. Until then one can still see it at Dallas Highlands (29, 36, 3014)