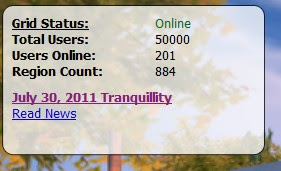 According to a recent post by Daniel Voyager, the virtual world Inworldz recently hit the 50,000 mark in the number of it's registered users. Considering this is double what it was thirteen months ago, reaching 25,000 in Dec. 2010, this would suggest the future of the alternative virtual worlds is a bright one.

Hamlet Au's recent article on OpenSim, however, suggested this was not necessarily the case, at least with all of them. In June 2009, this original of the alternative virtual worlds based on Second Life's open source code had nearly over 33,000 total users, close to 10,000 whom had been active in the past month. Today, OpenSim has a greater number of regions and their total number of accounts has more than doubled. But, the number of those active within the past thirty days is just under 3,300. A shrinkage of active users by about 66%.

Exactly why this many have stopped using OpenSim one can only guess, although this place lacks an inworld currency, and therefore has a limited economic potential. It should be noted that OpenSim is just one of a number of worlds that fall into the list of "Open Simulator" based worlds, including Avination, which although is currently the second-largest of these grids is thought to have a stable, if not growing, population. And this world, like InWorldz, does have an in-game currency, as well as boasting combat systems, and has been attracting events. And there's that Avination's viewer has a Macintosh version. One needs a PC to get to OpenSim.

Hamlet Au thought OpenSim's decline was important to pay attention to. With people looking at ways to get around their high tiers, particularly during the persistant bad economic times, some have suggested OpenSim. But to paraphrase Hamlet, such a move would shrink one's potential market of users. While one can (and some are) making accounts in both Second Life and one of these other virtual worlds, not a great deal many are doing that.

Although InWorldz is still growing, its success is not being repeated in most other open virtual worlds. And even then, it's number on at any one time remains small compared to Second Life, which will continue to be dominate other Grids in users for the forseable future.