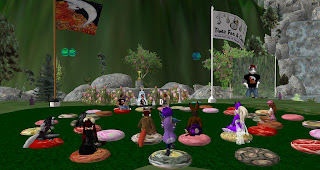 On Friday Jan 27th, the Passionate Redheads held their first meeting of the year. The official start of the Relay fundraising season “Time for a Cure” isn’t until March 10th, but it wasn’t too early to plan. Team leaders Sabine McGetting and Daaneth Kivioq presided over the meeting, of which about a couple dozen showed up in the hour-long gathering.

A number of ideas were discussed. Themed dances such as 40’s jitterbug and 60’s rock were suggested. Daan told there would be more “Bid Me or Not” events, referring to the three “Bid me Human” events last year that culminated with Rita going around in a human av until the Relay weekend after 75,000 Lindens were raised. He suggested he might put himself on the line again in a “Bid Me Bunny” event, the mention of the av being a pink bunny getting a few chuckles. Rita mentioned that with Sunweaver Air changing hands, Club Cutlass would be remodeled, “When it is done, we can do a grand reopening and donate the proceeds to the RFL.” Also suggested was a fishing tournament and a pony fundraiser.

There were also a few recommendations. One was supporting other teams, such as the Steelhead Salmons. Another was getting events on the Linden Lab SL events calendar. Also mentioned was Bryanr Rickena’s RFL Passionate Redhead’s Museum in the Precious Dragons sim at (96, 32, 22), and that there would soon be a changing of Relay groups. The new chat group was “Relay for Life Volunteers,” the old SL Relay for Life being discontinued.

To read Sabine McGettin’s account of the meeting, go to her post in the Passionate Redhead’s Blog.