Reader Submitted: Say No to ACTA by Polish Gothic

I am writing to you due to the current signing ACTA document. I will try to explain it the best that I can with my English skills, I hope you will understand.

ACTA with it actual rules can be highly dangerous for freedom of citizens and for small companies all around the world. As it states, there won't be possibility to produce substitute parts for electronic supplies and planting seeds which are branded just imagine how big disaster can it bring for people and how many will loose their jobs.

As for censoring internet - this way of fighting with piracy is highly wrong. Researchers say that most of people actually buying artistic products as music, movies and so on are the ones who downloaded it from the net before. If they won't have the way to download files automatically sales will fall since we will not now what to buy. You should realize most of such things are over expensive for common citizens, so they will buy only things they like, if they don't know if they like, they won't buy. 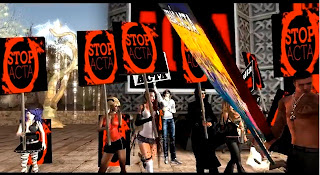 If you want to fight with piracy make a way to lower the prices of software, music and all the staff which is downloaded from the net now - as there is carrot and whip method of controlling - you should first try to use the carrot, not the whip. using the whip right now will only cause bigger uproar.

Before voting for ACTA, consider a word from citizens and their rights.
Our residents from Polish Gothic made a protest against ACTA at 23-01-2012, you can watch movie from this protest on: http://www.youtube.com/watch?v=jmQk-6VhFP4


You can find more information on: http://www.youtube.com/watch?v=citzRjwk-sQ

and http://www.stopacta.info/
You can vote on ANTI-ACTA petition here: https://www.accessnow.org/page/s/just-say-no-to-acta
Thank you for hearing out a voice from ordinary citizen. Also I want to tell you from private, if there won't be net on the way it is now, I would not be able to write this message to you because most of my English skills along with knowledge comes from using tool called Internet.