A new club recently moved to the Purrfection Estates, the Cocktail Nightclub, also known as the Cocktail Lounge. 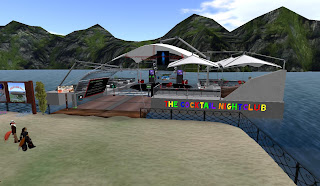 The club is on a small island in the southern part of the sim, separating it from the rest of the land, accessible by bridge. Originally, the place was a dark building like a city nightclub, with separate dance floor, cocktail lounge, and a couple private rooms. More recently, the place has been rebuilt with a more “open air” look. The walls are gone, giving the impression of the place being open to the breeze, with overhead tarps to shield patrons from the sun. The dance floor makes up the center of the club, with the DJ’ booth opposite from the entrance. The private rooms are gone, but there are three corner areas where visitors can relax on the couch while chatting, plus the bar in a fourth corner where people can order drinks from the bot bartender. 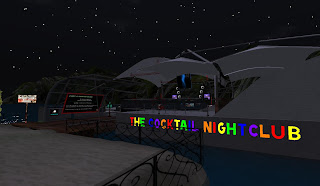 The club is owned by Rich Mordly, with DJ Firefox Doghouse as a co-owner. It is one of the clubs in the FCA, but unlike most of the other club owners in the “Furry Club Alliance,” Rich usually sports a normal human look. Talking to Rich, he had worked at another club some months ago, before opening the Cocktail lounge. In it’s first locale, it offered a number of themed events, notably neko and rave.

On Wednesday December 7th at 6PM SL time, the Cocktail Lounge had it’s Grand Opening party. DJ Firefox was spinning a variety of music. About two dozen people attended durring the two hour event, a mix of furred, neko, and normal human avs with no one group making up the majority. Besides the contest for the best-looking avatar, there were also trivia contests up the whole time.

Talking with Rich and Firefox after the party, they were satisfied with the turnout, “today's Grand Re-Opening event was a huge success.” 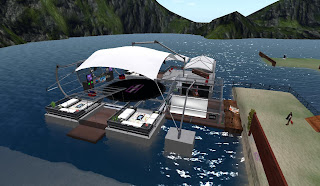 Currently, the Cocktail Nightclub has events regularly on Tuesdays and Thursdays from 9 to 11 SL time, with some special events on Sundays. Rich eventually plans for the club’s hours to be on a daily basis. DJ Firefox says he plans to DJ on every day as well, “I have fun DJing here. ... Everyone here is nice, easy to get along with.” Fire explained teammate Niterider could serve as backup if he was ever held up in real life. And of course they could always call on the FCA alliance. They plan a number of themed events in the future, such as “Best in Cyber,” “Best in Dragon,” and a special Crux avatar event, “I got quite a few.”

Rich and Firefox are still hiring staff, such as hosts. Those interested are asked to send Rich (or Firefox) a notecard saying which position they want and what hours they can perform. Those on the team are expected to be courteous toward patrons of the club and maintain a fun-filled atmosphere for all.

Their goal is to have a first class club everyone will want to come to, “If you want a good nightclub experience, head on to the Cocktail.”