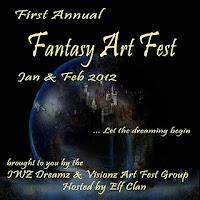 Nazz Lane sent us a Press Relase from Inworlds, concerning a festival in the virtual world Inworldz.

Following on the heels of the highly successful "Inworldz Dreamz & Visionz" festival, the founder of Alexanderia's Kingdom, Jeri Rajha, is pleased to announce the organization of the "Fantasy Art Festival" to be held in the virtual world of InWorldz. The festival is being hosted by the Elf Clan. This festival will be a juried event and applications are being received now for up to 35 plots (31 land and 4 water plots) for individuals or for teams of artists. Plots will be allocated on the 16th of January, and the group assignment/tag will be given out. The building will be completed by February 3 rd. Then the artists works will be open to view and the judges will begin their selections.

More information can be found in Nazz's blog "Lane's List."
Posted by Bixyl Shuftan at 6:00 AM