Meanwhile Back in Azeroth: "The Tauren Chieftains" 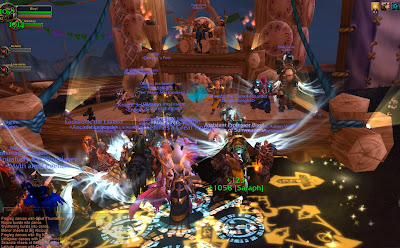 This was one experience in World of Warcraft that reminded me of a few Second Life ones.

A while ago, I came across a music video on the Blizzard website, one of a band of Hordesmen in a rock band, singing a WoW themed song, "I am Murlock" (a fishlike being noted for its gurgling cry when attacking). The name given the band, the "Tauren Chieftains." This was a bit much for a Medieval-themed game, though with the steampunk elements, maybe not *too* far off the wall ... maybe. As a Horde player, I saw them in Silvermoon, but never did see them play in-game, until recently.

At the Darkmoon Faire last month, I came across a music stage, with announcements, "The Tauren Chieftains will be playing in ** minutes." And right on time, they appeared on the stage, guitars blaring. The Orcish singer was yelling some Azerothian version of "Earth, Wind, and Fire," while shamanistic displays of power resulted in rocks welling up from the ground, wirlwinds, and lava rocks raining down on the ground (away from audience members).

While a few in the audience merely watched, most intereacted in some way. Most by dancing, but others created their own special effects with their own displays of power. And of course there were always a few whom *had* to draw attention to themselves by jumping on stage (note to Blizzard, maybe a bouncer quest for the Darkmoon Faire by keeping the stage free of rowdy fans).

And as quickly as they started, they vanished after the last note.