Wednesday January 18th saw a number of websites protest SOPA and PIPA, by both organizations and individuals. Sopastrike.com billed it as “the largest online protest in history,” claiming ten million signatures had been collected and over three million emails sent in response to the two bills in Congress. They claimed over 115,000 various websites took part, some of which they showed pictures of from Reddit to Wired to BongBong and more. Not all of the protests were on the Internet. People also got on the streets in New York City to voice their opposition.

The most famous website of the protest was most likely Wikipedia’s. After they took down their blackout page, they put up a link to a “Thank you” page: 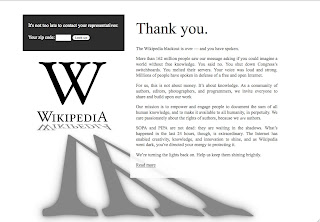 The Wikipedia blackout is over — and you have spoken. More than 162 million people saw our message asking if you could imagine a world without free knowledge. You said no. You shut down Congress’s switchboards. You melted their servers. Your voice was loud and strong. Millions of people have spoken in defense of a free and open Internet. For us, this is not about money. It’s about knowledge. As a community of authors, editors, photographers, and programmers, we invite everyone to share and build upon our work.Our mission is to empower and engage people to document the sum of all human knowledge, and to make it available to all humanity, in perpetuity. We care passionately about the rights of authors, because we are authors. SOPA and PIPA are not dead: they are waiting in the shadows. What’s happened in the last 24 hours, though, is extraordinary. The Internet has enabled creativity, knowledge, and innovation to shine, and as Wikipedia went dark, you've directed your energy to protecting it.We’re turning the lights back on. Help us keep them shining brightly.


And the protests had results. Over a dozen Senators publicly announced their opposition to the PIPA bill that day, including five former co-sponsors, bringing the total opposed to nineteen Senators (as of January 17th). Most of the new opponents were Republican. Arstechnica.com suggested this was the result of conservative media such as the Heritage Foundation and redstate.com declaring their opposition to SOPA and PIPA. Redstate.com went as far as to promise to work to defeat supporters of the bills in their reelection bids.


It isn’t just politicians who are facing backlash. Among the supporters of SOPA is the Entertainment Software Association, or ESA. The ESA runs the annual Electronic Entertainment Expo. One company, Red 5 Studios, which makes the popular “Firefall” game, pulled out of the yearly show. They used the money it would have for promotions there to start a new organization, the ”League for Gamers.” Red 5's CEO appeared in a Youtube with other gamers to express their point of view.

The Motion Picture Association of America responded to the blackout by calling the protests “irresponsible” and a “stunt.” Their main supporter in Congress, Senator Chris Dodd, called the blackouts of major websites an “abuse of power,” adding, "It is an irresponsible response and a disservice to people who rely on them for information," calling the protests, “yet another gimmick.”

The debate took another turn on Thursday January 19th when Megaupload, one of the world’s top file-sharing websites, was shut down on charges of copyright violations. Besides rhe debate of whether this was right or wrong, people asked if there were already procedures to take down websites, what was the purpose of SOPA and PIPA?

PIPA is up for a vote in the Senate Tuesday January 24th. The House Judiciary Committee will go over SOPA again in February.