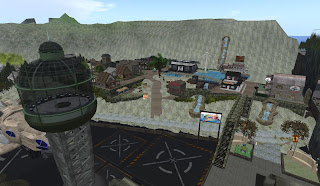 There was some sad news for sci-fi fans in Second Life last weekend. It was announced that the "Firefly" roleplay community Washtown at Burnet would be closing down. The place had been running for over five years.

Sim owners Anastascia Christiansen and Jadi Goodliffe announced the decision on March 22, saying the reasons for the closing were financial, they could no longer afford to keep it running.

Sunday was the last day the sim was certain to still be around. I dropped by, and ran into a few people, among then Anastascia, " ...it does deserve to be remembered and it will always be remembered in my heart." 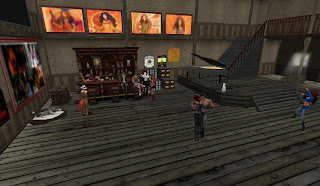 "This sim was started by me and Jadi, and a friend named Deiter. We use to play on a firefly mush together and then it closed. I found SL and dragged them in. At that time there was nothing for Firefly in one area, just a bunch of scattered fans. So we bought a little piece of ground and built a little club and called it the Hoban. Soon people started coming. We bought the big Firefly and more people came to see it."

"It grew from there to be a full sim. We got more people coming here and well we tried to add and add to bring the firefly community together. The RP evolved from that. But it was just a way to connect fans of the show in whatever way they wanted to enjoy the place."

Cobb Compton had this to say of the area, speaking somewhat 'in-character,' "I've only rented here several times Bixyl. I can tell ye, I scanned the map as a noob for days, lookin' for 'home' and that big Firefly down yonder at the spaceport - named the 'Raven' got me out of bein a help area hobo to a straighter line focus."

"I know what you're going through," Makiya Nightfire told one girl, "I haven't been here all that long, but I have had to leave behind a fond gaming area with many players I cared about. At least there's still other areas to play and life can go on if you wish."

Asking about eventful moments, some residents mention a spontaneous striptease show, and a hanging tree made into a gallows. Anastasia added, "We also had the producer of Eureka (a cable TV show) visit us once here in Washtown." Washtown was named after the pilot "Wash" whom died near the end of the movie based on the show, Serenity. 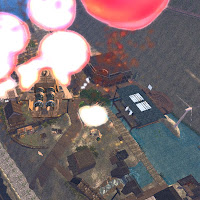 In the RP, residents had just a few days to wrap up plotlines. The final event was the nuclear reactor blowing, and the town having to evacuate. One of the residents passed me a screenshot of the radiation leak and the ship "Raven" taking off with the last evacuees.

Anastasia was sad to see the place go, but happy for the time put in, "Lots of memories and lots of friendships that I am sure we all will hold onto for a very long time."