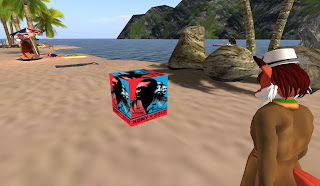 In recent days, there's been an activist campaign that's been taking the Internet by storm: Kony 2012 by "Invisible Children." For those who don't know, "Kony" is Joseph Kony, the leader of a guerrilla army in Africa known for it's kidnapping of children and it's ruthless brutality. The idea of the movement is to make Kony better known by spreading word of him, and hopefully encourage people to go after him to either kill him or bring him to trial. Look up "Kony 2012" on Youtube, and you'll get lots of videos. Plus people on Facebook & Twitter have been forwarding Kony 2012 stories as well. 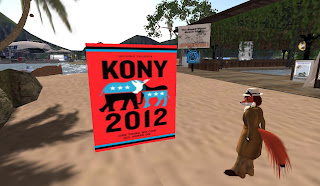 Any1 Gynoid informed me this movement reached Second Life by sending me an object labeled "Kony 2012." Rezzing it, I found a cube with a poster on all six sides of the man's profile next to Bin Laden and Hitler. Inside the box were a number of posters from huge to medium size of three different kinds, all with anti-Kony messages.

Not all the stories on Facebook I spotted followed the Kony 2012 bandwagon. One from "foreignpolicy.com" expressed skepticism of the hype.