Tales from Podex: No Pot of Gold for Burglar 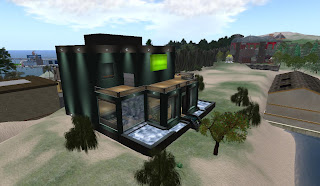 It was a fairly typical March day at the Podex Exchange. Between customers, the tellers would chat of goings on. Some talked about the opening Relay Life season and the various events it's teams held. Another mentioned the Military Expo near the end of the month. And of course, there was St. Patrick's Day. A couple of the tellers had gone to Dublin, but had to leave due to the lag. Two others went to themed parties elsewhere, and one had gone to Castle Blarney to kiss the stone.

In the middle of the talk, someone walked in. He was wearing green shorts, a green vest, and a green hat with a buckle. Definitely St. Patrick's colors. After some moments of silence, one asked, "Um, can I help you?" 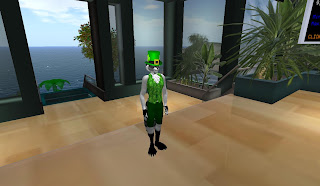 "I be after me pot o' gold," the visitor answered in an stereotypical sounding Irish accent.

"I want me pot o' gold. I be following' the en' o' th' rainbow to here, and now I be after me gold." He then began walking to the stairs.

"Jess a moment," one called out to him, imitating his accent, "Don't ye think we be able to see threw yer disguises an' shenanigans by now? Th' mask on your face, your ringed tail, ye be 'Clumsy Cooper' the good-fer-naught bandit."

"Who be clumsy?" the visitor asked, "I be from th' Emerald isle, and I be taking a leave from you as soon as I get me pot 'ol gold."


"Th' only place ye be taking a leave to be jail." the teller challenged.

"Now don' get ye britches in a bonnet," Clumsy then began waving a large stick around, "I'll be docking ye with me shileigh."

The teller chuckled, "Don' make me laugh. Ye can't fight worth a darn. Besides, known' you, that stick be from a freebie barn, too cheap an' weak to fight with."

"I'll show you weak!" Clumsy growled, forgetting the fake accent and taking his stick and slamming it against an ATM machine. But instead of leaving a mark or a crack, the wooden length went SNAP and broke in two. Clumsy's expression then changed, looking nervous, "Um, I think I be taking me leave of you right now." 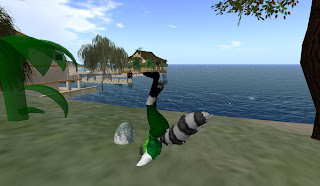 Clumsy then bolted and ran out of the bank, his hat falling off as he left the building. Unfortunately for him, he didn't pay much attention to where he was going, and tripped over a rock. The thief then pratfalled, knocking himself out. It wasn't look before the SLPD showed up and took him in, charging him with attempted griefing.

But even if Clumsy had slipped past the tellers, there was no way he could have taken any cash. “All our exchanges are done by way of electronic transfer,” an employee later explained, “He wouldn’t have gotten away with a single, solitary Linden.”