The Ides of March at ROMA 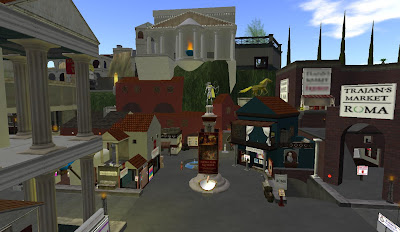 Considering March 15th was the day Caesar met his end, it might be a good time to hop on over to the ROMA sim. It's actually one of five sims in the Roman area, which although home to a number of Roman groups is very much open to the public and visitors encouraged to drop by. "Going native" isn't a requirement, but history nuts may want to don a toga when getting around (see below).

Dropping in on the entrance at the Customs House at (214, 25, 22), one is welcomed by a 'bot in uniformed and has some information on getting about the place available, as well as free togas. One can also go through a sewer adventure for a chance to learn more about the place as well as getting more freebie items.

Going further about, one finds the place faithfully accurate in the style of the ancient city, but as noted in the builder's webpage, "ROMA is not a reconstruction of any specific part of the ancient world, and no build in it is a 1:1 reconstruction of any ancient Roman building. Instead, Torin decided to create unique builds based on canonical Roman architectural forms while allowing for a great deal of reinterpretation. This created a hybrid build that is at once instantly recognizable as ancient Roman, but also fresh and absorbing." The occasional red button will give a notecard explaining what a particular location was for.

The region has distinct districts with different feels, such as the gritty Wharf area and the marketplace. The arena offers combat, and there is also a track for chariot racing. There's also a bathhouse (no adult behavior please), temples to Roman gods (near the Jupiter temple, I found a freebie thundermaker), public gardens, and much more.

Torin Golding is the builder and Prefect of Roma, with Julian Augustus the Emperor and main authority of the lands. More information of the region can be read at Torin's Blog. There's also a Flickr page, and a Roma community blog. If one's timing is right, you may come across one of the festivals (sorry, nothing was mentioned about reenacting the last moments of Caesar).

I've only explored part of the area so far, and have yet to take a look to see if some activities such as archeology are still around. But by all means the place is worth checking out, especially for history lovers.