New Ravenloft is owned by Joe Sparrow, but is run by Malcious Vuckovic. Talking to Malcious, he described the sim as "a WW2 combat 'slightly RP' arena based on Operation Goodwood, a combined British/Canadian assault in which they clashed with elite members of Germany's Tank divisions over open farmland and forest. … currently two main groups use the sim" the 272nd Axis Infantry Division, and the British 21st Army." Groups representing other involved countries are also welcome, "There's an American group being set up" and others expressed interest in forming Russian and Finnish teams.

Malcious acknowledged there were details less than completely accurate with history, "but the purpose of the Arena is for people to shoot each other and have fun. We use the Vice Combat System, which I love simply because you don't need some laggy hud nor do you need to create some account on a website. You can just pick up one of the freebie guns and get started, we've also provided uniforms and various tidbits to help players get immersed … We have guns, tanks, planes, some you have to pay for, some are free."

Malcious stated there was an emphasis on being friendly with newcomers, with no minimum age for accounts. Groups were prohibited from using avatars under four feet tall (or giant ones) and child avatars "I'm not a fan of child soldiers … Cony is a d%#@." But groups were free to have furred and neko avatars on their teams, or not, "at the moment only one of the Axis groups is saying no to them, but only while they are in uniform, this is purely for authenticity's sake, its not a sim rule and I'm not going to force them to change it because I'm not here to micro-manage all the groups. … there is another Axis group which allows furries."

One problem that some Second Life military groups have had is with drama. Malcious had an interesting policy with dealing with two people in a drama match, "There is this room with a log suspended over a pit. I give each person a lightsaber. One starts at one side of the log, the other starts at the opposite end, and … first to die loses." The issue is then declared over, "It's odd but it works."

Over New Ravenloft is a warehouse building which serves as a store, as well as the Teleport point to the sim. on one side are a row of tanks of various kinds and nationalities. On the other are signs of what's up for sale, those in red still available but are in the process of being updated. The vendors are in the back of the warehouse, selling a variety of guns, tanks, planes, and even a few ships, "Tanks range from about 600L to 1,500L … pretty cheap … more we sell, easier it is to keep the sim open, also tank combat is fun." 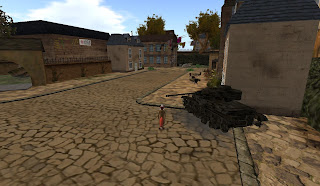 To the left of the vendor boards are the teleports to the Allied and Axis respawn areas, "I only have the two respawns up at the moment, each flag will take you to that teams base, the allies in the Village and the Axis in their own occupied Mansion HQ. I'm going to install a neutral flag for visitors or civilians later. Each team has three respawns, to try and limit spawncamping. … If you get killed, you're taken to a room away from the battlefield where you can heal and choose a respawn location."

The heads of each faction are KlausKlempt Resident for the Axis and Sephiroth Reiner for the Allies. Sephiroth was busy when contacted, but KlausKempt had a few words. He felt things at the sim were going, "Stupendous. Magnificent. Our traffic is the highest of all WWII-themed combat and RP sims in SL … It is a testament to the quality of our sim, and the dedication of our players." KlausKept stated that there was an effort to keep the style of combat historical by emphasizing rifles, "If I may gloat, one of my best German Grenadiers defeated a team of four British riflemen 28 to 7. He was armed only with our trusty Mauser. We strive to provide historical accuracy, even going so far as to ensure that automatic weapons are used in the historically accurate roles, and that the rifle, which was by far the most common infantry weapon of the Second World War, is not forgotten." 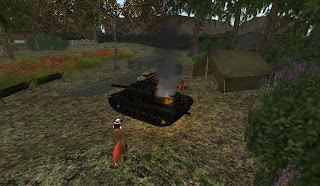 For the moment, New Ravenloft is the only sim in it's combat RP. It is next to several others, "the adjoining sims are part of the D.O.R. (Dogs On the Run) Project. … no one aviation company is in charge or has a direct say in how the place is run, and there are no product bans. Anyone is allowed to fly whatever the hell they want. I'm joined with them as the terms of my sponsorship, also I'm a great believer in the project and friends with the owner. … I'm hoping as Ravenloft increases in popularity, so will DOR."

Talking with a few of the DOR staff, designer Creative Lisa built the place with her goal as "a good mix between airfield, place to relax and combat." Noting the dirt runways, the leader, Da Admiral, commented, "We didn't want a concrete airport." "I found my home here, and we have the best boss ever." Malcious has no problem with modern aircraft flying over the WW2 sim as long as they don't attack the units.

Not everyone comes to the sim to fight, or shop. Malcious observed that some were going to the French village just to relax, "people seem to like to hang out there, I'm told its peaceful."

For the future, Malcious eventually plans to have more sims for the combat RP, "more tanks and other goodies are due for release in the coming months and I hope to get some more events started too." Among the planned events are scenarios in which both the Axis and Allies team up against a common enemy, such as zombies or alien invaders, "Changes and updates to the sims design are always ongoing. I'm a builder, nothing is ever finished, never. I have the Lego block imprints on my feet to prove it."

New Ravenloft's owner, Joe Sparrow is a builder of a number of planes and vehicles popular among combateers in Second Life.