Two clubs are looking for people to help manage them, due to the owners having multiple demands in Second Life and real life. These are the Castaway Cove and Green Meadows clubs. 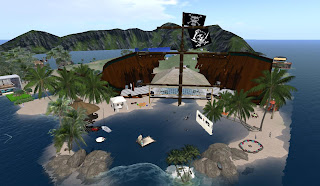 The Castaway Cove club was built fairly recently, a few months ago. Built in the Kalmeere Paradise sim, it was intended to be a temporary club until the sim was developed for residential use. But plans for housing have changed, and the club will be untouched for some time. Most likely, it will stay at the sim in some form.

Castaway Cove is owned by Nydia Tungsten, a longtime DJ whom has also ended up with ownership of a few clubs. This beach club has a unique layout, resembling a wrecked pirate ship broken in two. The dance area is located in between. There is a small shopping area, some board games to play between events, jet skis to boat around the sim's ocean area, and a "Primtionary" game, possibly the only one around outside Luskwood. 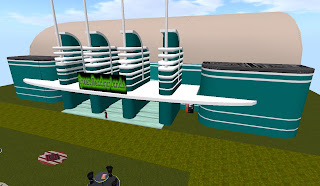 The Green Meadows Club has been around for a few years. Originally opened as Xanadu by Perri Prinz and RECoyote Mindes, it was developed to be a "classic rock club for people who enjoy both popular and obscure rock music from the 70's and 80's." The club temporarily closed in 2010, but was reopened a year later to a cheerful group happy to see its return. Officially, it was renamed the Green Meadows Club, but fans continued to call it "Perri's Xanadu."

The club's exterior has a strong resemblance to the Pan Pacific Auditorium in Los Angeles, which was the setting of the club in the movie "Xanadu." The inside of the club is made to look like a 70's disco, with sacks of vinyl records next to the DJ booth. The place has a small store area nearby, as well as a teleport to Perri's art gallery with illustrations for her "Spectral Shadows" stories, and more.

Both venues are part of the FCA club alliance, of which the various clubs work to coordinate their schedules to avoid time conflicts. Those interested in managing Castawave Cove are asked to send a notecard to Nydia Tungsten, and for Grean Meadows send a notecard to Perri Prinz.