Still Odd After All These Years: Tuna Oddfellow's Odd Ball 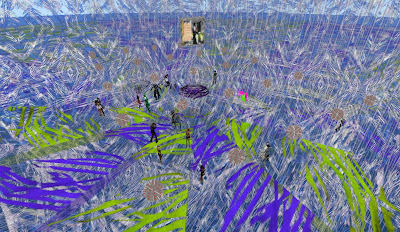 One of the more unique regular performances in Second Life is the Odd Ball, taking place twice a week. Run by Tuna Oddfellow and Shava Suntzu, it's been running on the Grid for a few years.

For those who don't know, Tuna Oddfellow is a magician in real life, Mathew "Fish the Magish" Fishman. He got attention during Second Life's heyday in 2007 when NBC did a "Most Talented Avatar" competition. "I've got a mission to bring a little magic to everyone's day," he told the reporter then. And magic he has delivered, eventually coming up with the Odd Ball.

Tuna's partner in bringing the Odd Ball to life is Shave Suntzu. They met in real life before meeting in Second Life, and worked to make the show a spectacular performance. The dazzling special effects are more than just a visual treat. In some people, they can produce a "mild euphoric state," others comparing it to "getting stoned." Not everyone reacts in this way, one person I took over saying it just gave her a headache. But they were interested enough to have medical research done on the matter (details in a 201o story).

By 2010 though, the two were more concerned with Tuna's health problems that were taking a financial toll as well. With the help of friends and family, they got through them. Tuna's heath problems haven't gone away, but he and Shava continue their performances on the Grid. Occasionally they have a guest musician, such as Cypress Rosewood.