Meet other Premium members and travel together through a dense rainforest filled with abandoned ruins, mysterious tombs, and hidden surprises in Wilderness, Second Life's newest exclusive destination for Premium-only fun. Hop aboard a boat cruise for an Amazonian adventure sure to thrill and chill, or check out one of the bars or hangout spots. Rumor even has it there are fish within the waters of the Wilderness, so grab your fishing rod and attempt to catch a rare species - or try to wrangle an ornery alligator! 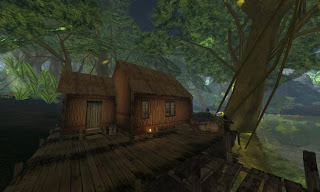 The wilderness is made up of six sims far (southeast) from the mainland: Gecko, Caiman, Piranha, Tapir, Capybara, and Leech. different from the rest of the Grid in a few ways. Like the Linden Realms gaming area, it's a creation of Linden Labs. Unlike Linden Realms however, it's finely detailed, making much use of mesh objects. Plus it's limited to Premium Account members, the post asking people to take advantage of a 50% discount on memberships (lasting one quarter). Free players trying to get in will be blocked. According to the blog post, it also makes much use of the new Pathfinding tools to animate the critters. It also stated they would be generally available "at the end of March."

There was also a Frequently Asked Questions page for the Wilderness in the Knowledge Base. Besides exploring the place by foot, one could swim or scuba dive and "additional fun activities include competing in a goat race, charming rats with a magic flute, capybara herding, playing fetch, riding around on guided mounts, and various mini-games." There were also details on getting the best visual appearance, depending on how powerful one's computer is. 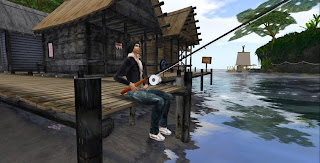 The response has been, on the whole, positive. In the "Eternal Sunshine" blog, Mera thought the place looked much better in-avatar than what the pictures suggested, "I got a different feeling when I walked around the paths of those sims than I usually get in Second Life. They had more LIFE!" She very much recomended walking about instead of flying or teleporting. She did wonder if a few more features, such as poisonous snakes or infectious diseases, might be needed to keep the place something of a challenge, but she liked it.

Yordie Sands had a more mixed review. At first she had a great impression of the place. Then she had some second thoughts, being less than thrilled with what she saw as "silly" animals, "strange choices" by Linden Lab, and "2007 level animations." She felt while it would still appeal to Premium members, she thought it would mostly be to newer Premium members.

Hamlet Au called the place an attempt by the Lab to boost Premium memberships to make up for shrinking revenue from land tiers. His short article was more noteworthy from it's varied comments. Some free players thought it looked good, but it would take more than this to make them subscribe. Some seemed to have the opinion the one big thing wrong with the sim was Linden Lab itself, "From some of the comments here, I get the sense that there really IS something new and different here (a vast place to explore) but the video just looks like More Of The Same."

The Linden Destination Guide gave a landmark to the Wilderness at Caiman (215, 13, 22).