I recently heard about new "Destination Island" areas set up as the new entry point for newcomers. With the Linden Helper and Greeter Islands recently closed, this got my attention. I couldn't head over with my own account, getting a message saying the destination was "not available." So I decided to have a see for myself by creating a temporary alt, and logging in. 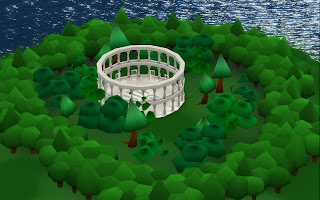 And the experience was … simple. One landed in a circular structure made of arches and pillars. The floor was white brick with the Linden Lab hand symbol in the center. Around the place were trees in the style of the Linden Realms area. One could walk for a short distance and fly around. There were a few other avatars around, mine taking over a minute to rezz. There was no music.

A window named "Tutorial" popped up, which had simple, basic instructions such as movement, panning the view, flying, chatting, adding a friend, and using search. There were several portals here, with names like "Popular," "Music," "Adult," "Editors Choice," etc. I chose one named "Roleplay." But this revealed a flaw in the Linden's intentions. The sim where the infohub was, a script called my avatar "too young," and I was ejected to another sim at random. This would be a very confusing start for a newcomer.

It certainly was a different entrance than my own initial experience to Second Life years ago in December 2006, over five years ago on Orientation Island. It was fairly well detailed, a beach island, and looked interesting and different compared to what else I had seen. At least it looked interesting once everything rezzed. And the music was nice too, as well as having appropriate lyrics, "If you bravely go, you can build a whole new wor-ld!" The brick trail I went on took me to several stations, which had me click on a Linden hand hologram for a notecard on how things worked, such as flying and chatting. 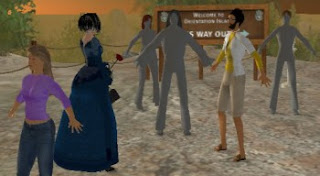 Trouble was, the lag. On my old PC, it took a while for everything to appear, and getting around was terribly slow. Not to mention I crashed frequently. It was more than a little frustrating. It took a total of a few hours of time inworld due to the lag and crashes before I had gone through the island to the place where one. Trying it again more recently (see below) I moved much faster, so perhaps it was the computer that made me so slow then. Other residents described other problems, such as those tacky-looking "noob" avatars (Click here for a list of Orientation Island experiences from New World Notes 2008). 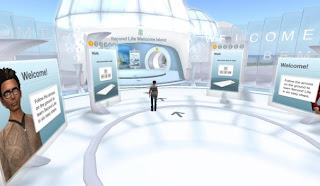 In March 2010, Linden Labs made a change. Orientation Island was replaced as the entry point with the Welcome and Discovery Islands. Hamlet Au described them as being two years in development. He thought they were an overall improvement, but still didn't take care of some of the issues newcomers had with Second Life. Noting the high tech feel with the white roundish buildings, he called it "like walking into an Apple store that's selling Microsoft products." The biggest improvement to him was the place being a series of instructional rooms, which he felt kept newcomers from getting lost or confused.

Following a trip through here, there was an option to head to Discovery Islands, an open place with a similar high tech look. It had video screens for more instructions (often from Torley Linden). Hamlet Au thought while useful, he doubted most new users would recall "much of the firehose of information thrown at them."

Blogger Mickey Vandevere described her own experiences with Welcome Island. She found herself cloudy, or naked and bald instead of blonde and clothed, "I feel alone, and I'm not having fun. And I know what's ahead. A true newcomer does not."

Daniel Voyager has his own article about the new Discovery Islands. It was his opinion (in the comment section), "I think many newbies will get lost and most likely quit faster than in previous years. Changes are needed ASAP! " Others commenting on his blog, and in the Linden forums, that this needed more work.

On another note, there are public versions of Orientation Island and Welcome Island up (Orientation Island Public and Welcome Island Public), the former where I found moving around was much faster than my first experience (though the beach look had been changed into grassland). Perhaps newcomers are better off with these places than with the new bare-bones welcome area.