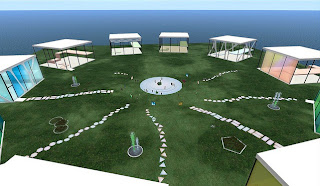 Daniel Voyager had a little sad news this week, notably for newcomers and those trying to attract them. The Linden Helper and Greeter Islands disappeared from the Grid.

The Islands appeared with little fanfair in November as part of a "Linden Beta Program" to help out newcomers. Besides Daniel Voyager, Caitlin Tobias also wrote on the areas. A thread in the official community forums also sprung up.

Despite some good reviews, at least initially, access to the islands was blocked in January, as well as taken off the Destination Guide. Although hopes were expressed for their return, this week's news means Linden Lab has called off it's recent program to help newcomers.

It's unclear what the reasons for the cancellation are.

Pictures of Greeter Island can be found Here.