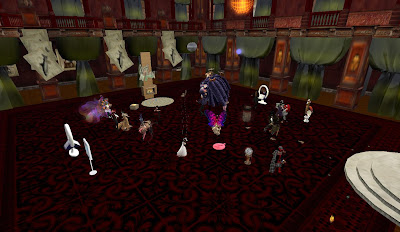 On the evening of March 30th as the Steelhead Community held it's "April Fool" dance. Those walking in had to be careful of the flash-bang mines and the bags of doo. And once inside, the scene was of general foolery, with people dressed up as clowns, The Joker, harlequins, and more. One had to be careful where one stepped, as the floor was littered with banana peels, a whoopee cushion, and more.

And Sheriff Fuzzball Ortega was there. And in a party like this, he naturally brought "The Hair," the massive hairpiece that has become identified with the Steelhead's Relay for Life fundraising. It continues to get comments, and not just from residents inworld, "Our kiddo in real life just pointed at Fuzz's hair and laughed, 'that's cool!' "

At one point, the party was bombarded with a shower of marbles. Baron Klaus Von Wulfenback, whom was also there, looked around and quipped, "I know this ammo."

It was a night of foolishness and laughter that night at Steelhead.