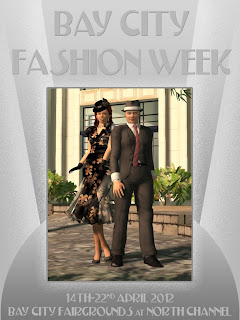 BAY CITY, SL - This April, Bay City is hoping to bring together the best of Second Life's ™ vintage mid-century fashion designers in one place, where they can wow us with the designs that best typify Bay City's theme: the American urban experience, between 1940 and 1965, perhaps best typified by Chicago circa 1950 and marked by a distinct deco influence.

Established designers will be provided with a space in the Bay City Fairgrounds, in the North Channel region, from April 14-22 to present the best in mid-century modern fashions for all Second Life avatars. Runway space and other amenities will be provided to help them highlight their designs. There may also be a few other related events and goodies to announce as time goes on.

While designers are not required to do so, they are asked to consider this a prime spot to unveil new, mid-century designs, rather than only pull from existing stock. They are also encouraged, but by no means required, to consider providing a free or low cost item for visitors to the event that they may give out at their stall.

For more information, contact Marianne McCann
Posted by Bixyl Shuftan at 6:00 AM