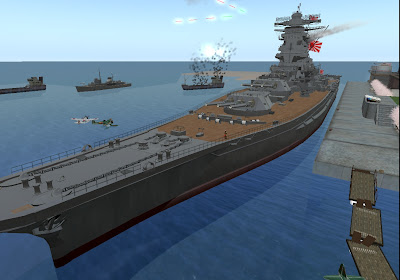 Some sad news for nautical fans. Checking up on the LM to the battleship Yamato, I found it was broken, the sim gone.

I wrote about the build a few years ago for Second Life Newspaper. The ship took the entire length of the sim, and was well detailed. Visitors could walk about, and inside a few places. There was also a seaplane available to fly (and a smaller version for tinies). Oddly enough, there were pictures of the real-life ship inside a sealed room with no door, which suggested there were further building plans.

However, I did see a second Yamato build in another location. So perhaps the ship still exists somewhere, unnoticed, on the Grid.

The real Yamato was one of two of Imperial Japan's largest battleships. In March 1945, it was sent on it's final mission in a last-ditch attempt to slow down the Allied advance. It was sunk on April 7. The Japanese Empire would never again launch a major naval operation, "the word Yamato was often used as a poetic name for Japan. Thus, the end of battleship Yamato could serve as a metaphor for the end of the Japanese empire."
Posted by Bixyl Shuftan at 6:00 AM