Meanwhile Back in Azeroth: Pandaren Snapshot 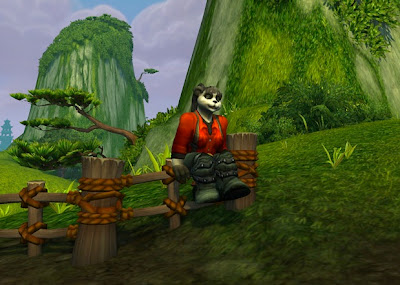 Blizzard recently released more screenshots of their upcoming expansion "Mists of Pandara," including one of this lady Pandaren, whom looks more like a farmer or brewer than a monk. The response from World of Warcraft fans seems healthy enough, the forum post this picture was found in had almost 4,000 responses as of March 22.

Blizzard is hoping the game can boost WoWs still gargantuan but shrinking membership. In February, numbers had dropped about 100,000 from 10.3 million in November to 10.2. And the November numbers are almost a million smaller from 11.1 million three months earlier in August. The company can still boast a few successes, such as about one million signing up for their "annual pass."

WoW's smaller numbers haven't gone unnoticed by Blizzard. Also in February, the company laid off 600 employees. While World of Warcraft is still the undisputed giant among Massive Multiplayer Online games, there have been some cracks in the armor. Still, with a peak of twelve million players, no one is doubting it's place in gaming history , "WoW isn't going to die so much as it may eventually peter out, and by that time, you and I are likely going to be well past middle-age."

Sources: Massivley.com, BBC
Posted by Bixyl Shuftan at 6:00 AM