On Sunday December 13, the winners of the MachinimUWA VIII video and art competition, "Pursue Impossible" were selected. Both the best filmmaker and the best sculptor received 60,000 Linden dollar prizes (about $240 USD) In a close vote by the judges, the  top prize for machinima went to Kobuk Farshore.

An awe-inspiring and brilliantly crafted film, 'Pursue Impossible' by Kobuk Farshore of Alaska, took the top spot and its L$60,000 prize for the 8th UWA International Short Animated Film Challenge (MachinimUWA VIII - Pursue Impossible), in a thrilling one point victory over defending champion and four time winner of the UWA film challenges, Tutsy Navarathna, the dominant Frenchman from Pondicherry, India, who delivered a tour de force with the stylish and visionary 'Death of Death?'. The US-Swiss combination of Haveit Neox and Lilia Artis finished 3rd, but also won one of the 2 UWA Special Prizes through their thought provoking offering, 'Tis An Egg'. Indonesian Diana Al Martini was the other recipient of the UWA Special Prize, with a film showing 3 amazing Australians who successfully pursued the impossible, Professor Barry Marshall, Dr Fiona Wood and Turia Pitt. 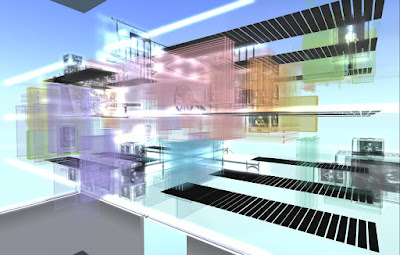 For the UWA Grand 3D Art Challenge, 'The Bridge' by Elif Ayiter of Sabanci University (SL: Alpha Auer), Istanbul Turkey widely regarded as among the most brilliant creators in the virtual world, was the winner over Australian Carmsie Melodie's work, 'Achieve Impossible' inspired by Thomas Edison and Nicola Tesla. The UWA Special Prize, selected by the UWA members of this international judging panel, went to Krystali Rabeni of the United Kingdom. Her creation Dream within a Dream' was deemed to the artwork that best encapsulated the UWA essence of 'Pursue Impossible'. Haveit Neox & Lilia Artis proved formidable winning awards across both the film and art challenges. The curator's award, went to someone without whom these challenges might never have come to be what they are, West Australian, quadrapop Lane. The alpha and the omega. It all started with quadrapop Lane in 2009 and its fitting that she is honoured in the last, as the sun sets on the Grand UWA Art & Film challenges in 2015.

This is the last of the University of Western Australia's yearly 3D Art and Machinima contests, they having announced there will be no more of this particular event, though may have others in the future should funding be available.