A Last Look at Steelhead 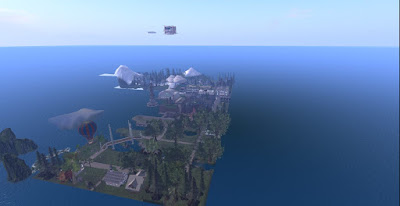 As we all say goodbye to 2015, for those in the Steelhead community they've also had to say goodbye to their old home, the Steelhead Estates. While one of the sims had been saved, sadly most were not. No more classes at the old schoolhouse. No more volcano parties at Mount St. Hellens. No more parties at the Wulfenbach Consulate building, and no more of the town meetings noted for everything from science news discussed to exploding sheep.

Fuzzball Ortega took posted this picture on Facebook a few days ago, what may be the last picture taken of these lands. He gave them maybe a week until they would finally fade away into the virtual nether.

But as a new year dawns, so does the hope that perhaps the community's fortunes will change. Hopefully new Steelhead sims will arise to join Nevermore / Ravenwood Forrest as new homes for this lively community of Steampunk fans.