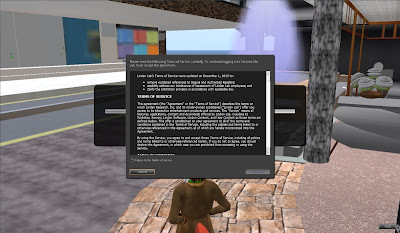 Logging into Second Life yesterday, I was greeted with a new Terms of Service to read and click "Accept" on in order to go about virtual life as before, which can be read in this link here: http://www.lindenlab.com/tos. And as soon as I logged on, I was IMed multiple times by friends bringing up certain lines, asking if these changes meant things from the Lab stating that legally any content uploaded belonged to them, of which another change in the ToS in August 2013 on thie matter caused a controversy that lasted for months, to clearing Lindens of wrongdoing should they decide to ban someone for sending reports against someone whom had some influence on the Lab. The Second Life Universe forums didn't take long to come up with a thread on the topic, "Ah well, at least the responders to your support tickets can still be snide to you, even if you can no longer be snide back."

The announcement announcing the ToS changes stated there were three major ones, (1) to "remove outdated references to Desura and Authorized Resellers," (2) to "explicitly address our intolerance of harassment of Linden Lab employees," and (3) to "clarify the arbitration provision in accordance with applicable law." The first was the result of their selling of the Desura game and application program provider service over a year ago and their banning of third party virtual currency exchangers, such as Podex.

Inara Pey touched upon the second and third statements in her blog. Of the second, "There has been speculation this relates to certain personal attacks directed towards Ebbe Altberg through the likes of Twitter. However, it would seem more likely (I would hope) that this section is intended to address similar attacks which have been made through the Lab’s own forums, etc., over which they have full jurisdiction." Of the third, "While I am not a lawyer – and so the following statement is purely speculative on my part – it would appear that included in these changes is an attempt to prevent class action suits from being bought against Linden Lab as a part of the arbitration process:"

My own opinion, Linden Lab could be trying to protect themselves against a class action suit by banned residents, such as the one Intilibber Brautigan was a part of. And of course the Lab has a history of trying to cover their behinds with lines and lines of poorly written legalese that can be interpreted quite broadly, leading to distrust by residents whom have learned to assume the worst at every change the Lab makes.

So what do you the readers think? Please leave your comments below.