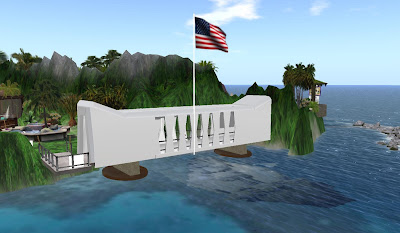 It was seventy-four years ago in which the Japanese Empire launched it's attack on the US Navy base at Pearl Harbor Hawaii. Over 2400 Americans would lose their lives in the assault, including nearly 1200 of the 1500 crew of the USS Arizona after a bomb penetrated into and detonated the forward magazines and destroyed much of the ship's interior. Most of the ships were salvaged, but the Arizona was left as a memorial to it's crew. In 1962, an official USS Arizona Memorial was opened.

Second Life has it's own USS Arizona Memorial, located in the Oahu sim. In the past, the place was the site of events, such as the 70th Anniversary commemoration. No event was planned for today, but the memorial remains for people to come by and pay their respects.