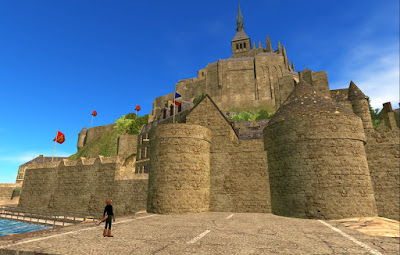 In a year that's been marked by the closure of some popular areas, one place marked for the end has so far been spared by the Lindens, at least for now. In September, Moeka Kohime, the owner of Mont Saint Michael, a recreation of a Medieval structure that has been a popular spot for visitors on the Grid, announced she could no longer keep paying the tier. It was feared the place would vanish after the end of the month, but it continued to be up in October. In November, Inara Pey found the place was still up. And when I dropped by the place the weekend, the good news continued. Mont Saint Michel was still around.

So why hasn't Linden Lab drop-kicked the sim into the virtual nether like so many other places? Maybe we the residents, at least those of us whom like exploring around, have simply been extra lucky as they haven't gotten around to it all these months. Or maybe the reaction to the SS Galaxy going down has given the Lab pause. Could Moeka have come across more money and resumed tier payments? Or perhaps the Lab is taking with her behind the scenes about purchasing the place? She hasn't provided any new information on the matter.

Perhaps we should just simply consider the place still being around a Christmas present from Linden Lab, and enjoy this extra chance to drop by another time.