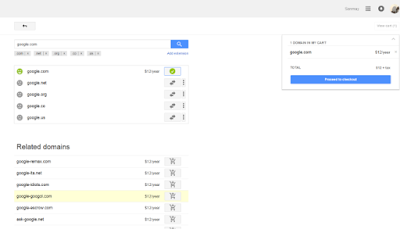 This Internet news story is several weeks old, but still worth talking about. It seems Google briefly lost the ownership of it's Internet domain name to a man in India, albeit for just a minute.

"I was learning more about the Google Domains interface," Sanmay Ved of Mandivi India would write in LinkedIn, "and typed google.com and clicked search domains. To my surprise, Google.com was showing as available!" He then used his credit card to purchase the domain, documenting his transactions on screenshots, and his transaction was confirmed, making him the new owner of Google's web domain.

But his ownership was brief. A minute later, he received an email stating his purchase was canceled, which Google could do as they owned the registration service, unlike a similar incident with Microsoft and it's domain in the United Kingdom. Some days later, he was contacted by their security team, stating he would get a reward for finding the error. Ved requested the reward go to charity, an educational group that runs 400 schools in India, "providing free education to more than 39,200 children in the slum, tribal and rural belts where child labor and poverty are widespread." Google agreed and doubled the amount.

"I can't shake that feeling that I actually owned Google.com," he was quoted as saying.

Reprinted from "Food on the Table"