Update on the CDS Election 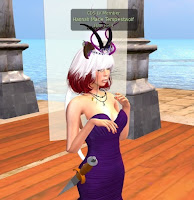 As the days get shorter for the people in the Confederation of Democratic Simulators to decided on whether or not to run, several people have thrown their hat in the ring. So far, Tanoujin Milestone, Rose Gray, and Lyubov (20180414) have declared their candidacy for the Representative Assembly. Hannah Marie Tempestwolf's (Han Held) had declared her intention to run again for another term as Chancellor. But last week, she posted an angry group announcement to the community following finding the CDS Museum which she runs almost completely empty. She would later announce she was withdrawing her candidacy for reelection, explaining what happened in her blog.

Since Han's withdraw from the election, two people so far have declared for the Chancellorship: Drewski Northman and 恭子 Kyoko (Samara Barzane). With two candidates, this means a race and campaign for the CDS next month.

CDS Citizens, those who own property on the community estate sims, have until 12 Noon SL time on October 31 to declare their intention to run for an office. The campaigns officially start November 3, and the polls open at Noon SL time on Nov 10, and close a week later on Noon SL time Nov 17.