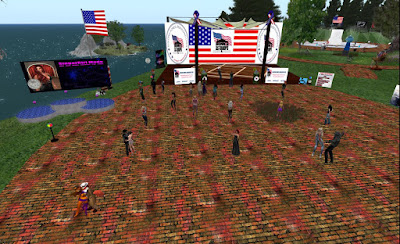 On Sunday September 30, Veterans Isle held their monthly benefit concert. From 11AM to 4PM SL time, one DJ and several live musicians performed for the crowd, DJ Waya Snowpaw, The Vinnie Show, Erin and Satin, Singergirl, and Austin Moores. The event was organized by Frets Nirvana. 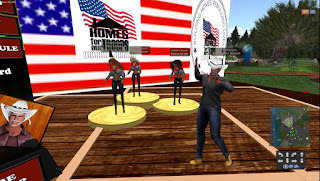 Dropping in the second to last hour while Austin Moores and his performers were on stage, well over 100,000 Lindens had already been raised, going into two house-shaped kiosks on either side of the stage. There were some match challenges in which someone agreed to match if a certain amount was donated within a certain amount of time. This included Austin, "OK I just put in my 10,400 as a match. And thank you!" People were happy to lend a hand to needy veterans, "They are not forgotten." "We'll NEVER forget what they've done for us...for our country." "NEVER !" "And the King will answer then, 'Truly, I say to you, as you did it to one of the least of these my brothers, you did it to me.'  Mathew 25:40" 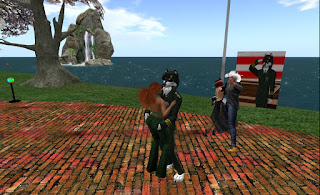 As the concert went into it's last hour with Singergirl (Singergirl Mode) on stage, the donations continued. The total passed 150,000 Lindens, then 200,000. When Singergirl's set was over at 4PM, there had been 231,000 Linden dollars donated. But the donations continued. Checking later, a total of 273,500 Linden dollars had been raised for the event. This is the second month in a row at least a quarter million Lindens had been raised.