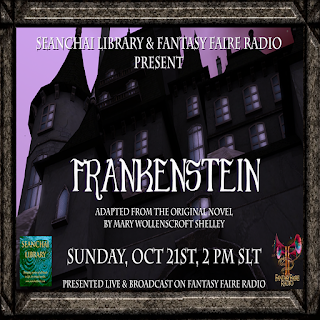 Second Life – On Sunday, October 21st at 2pm slt, Fantasy Faire Radio and Seanchai Library will present Mary Shelley's "Frankenstein," specially adapted for radio and live performance in six voices, in celebration of the 200th anniversary of the novel's original publication.  The two-hour performance will take place live at this year's iteration of "Haunted Holly Kai" high above the Blake Sea based Art Park, and will benefit Relay for Life.

Da5id Abbot, Corwyn Allen, Zander Greene, Shandon Loring, Elrik Merlin, and Caledonia Skytower will come together to present the script adapted by Skytower and Abbot from Shelley's original novel.  The performance, running just under two hours, will be live on stream at "Haunted Holly Kai: featuring Frankenstein" and simultaneously broadcast on Fantasy Faire Radio. Residents can teleport to the performance from the Park's Information Center. http://maps.secondlife.com/secondlife/Holly%20Kai%20Estates/205/120/22

The novel, "Frankenstein; or, The Modern Prometheus" was written by English author Mary Shelley that tells the story of Victor Frankenstein, a young scientist who creates a human-like creature in an unorthodox scientific experiment while still a student at University in Ingolstadt. Shelley started writing the story when she was 18, and the first edition of the novel was published anonymously in London on 1 January 1818, when she was 20. Her name first appeared on the second edition, published in France in 1823.

Famously Mary, her lover and future husband Percy Shelley, and Lord Byron decided to have a competition to see who could write the best horror story while staying at Byron's rented home, Villa Diodati, near the shores of Lake Geneva. After thinking for days, Shelley dreamt about a scientist who created life and was horrified by what he had made; her dream later evolved into the novel's story. It has had a considerable influence in literature and popular culture and spawned a complete genre of horror stories, films and plays.

In 1931, Universal Pictures released "Frankenstein: The Man Who Made The Monster" directed by James Whale and starring Boris Karloff as the Creature (now "Monster").  The screenplay was based on Peggy Webling's stage play "Frankenstein" which was loosely based on Shelley's novel. It is here that the Frankenstein as the green-skinned, bolt-headed, mad scientist experiment-gone-wrong took shape, forming the popular culture version that pervaded the 20th century.

"Haunted Holly Kai: featuring Frankenstein" will pay tribute to both the original novel and its film adaptations with an outdoor amphitheater for the novel's presentation and other planned events, and a towering castle featuring a mad scientist lab created by Stranger Nightfire.  Residents are encouraged to explore both the castle and the outdoor areas.  This year's "Haunted Holly Kai" will open October 21st and remain open through Halloween.

About Fantasy Faire Radio
Since 2014, Fantasy Faire Radio has been a special event station, sponsored by Radio Riel in its role as Media Partner in Fantasy Faire, the annual celebration of fantasy art, writing, design and creativity that raises money every year in the virtual world of Second Life for the American Cancer Society’s Relay For Life, supporting cancer research, caregivers and cancer sufferers all over the world. In 2017, FFR began broadcasting 24/7, as a full‐time Internet radio service. Listeners can tune in by opening https://radioriel.org in their internet browser and choosing Fantasy Faire Radio in the left hand sidebar, by opening http://fantasy.radioriel.org in a network audio player.

About the Seanchai Library
Seanchai Library (Shawn-a-kee, which means "Storyteller" in Irish.) was founded in March of 2008 in Second Life. The program remains dedicated to promoting the power of stories to transform and inspire through live voice presentations: "We bring stories of all kinds to life, in Second Life and other virtual worlds."  http://irelandslstory.blogspot.com/
Posted by Bixyl Shuftan at 6:02 AM