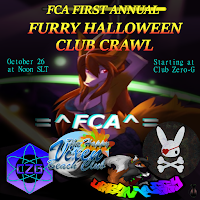 Tomorrow , Friday October 26, marks a ten-hour Halloween-themed event between four clubs: the FCA Furry Halloween Club Crawl. Organized by the Furry Club Alliance, the event involves Club Cutlass, Club Zero Gravity, The Happy Vixen, and Urban Furry. The action starts at 12 Noon SL time at Space Station Club Zero Gravity. At 2PM, the crowd will head to the Happy Vixen's Haunted Manor (the beach club is closed to regular events). At 4PM, it's time to head to the city to Urban Furry. At 6PM, the party heads to the sky to airship Club Cutlass. And from 8 to 10PM, the crawl ends where it began, back at Club Zero Gravity.