Madpea Goes Out With a Bang 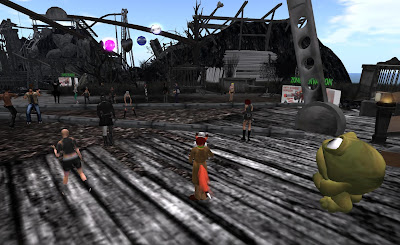 The MadPea gaming area, known for it's fun games such as "The Lost Treasure of the Incan Warrior," and in the past "Virtual Medical Doctor," has been effectively shut down with all the games closed. But before they did, they threw one big bash, with DJs playing music, and lots of marauding zombies.

Dropping by, the people were whooping it up. Unfortunetly, there were a few zombie party crashers, and they tended to go after those away from keyboard, taking bites until someone finally blew them away with whatever firearm they had. The bash went on Friday and Saturday, with raffles held up to Sunday. Not everyone was partying. Some of the "Peas" were spending one last round on a game, either to hurry up and win before the close, or just have fun.

This isn't the end of Madpea. Kiana Writer promises, "a brand new Madpea bigger and better then ever before" will emerge, with "whole new games with immersion never seen before" on the way.

But still, Madpea chat was full of fans disapointed that their gaming area was closed down, during the party, and afterwards as some players groaned they still hadn't beaten one favorite game.