Interview with Philp Rosedale at Burn2 by Emcee Widget

During the SL10B, Philip Rosedale, the founder of Linden Lab and Second Life, was interviewed by Emcee Widget at the Burn2 sim. Rosedale's avatar was quite different from his old Linden one, and commented at the length of time it took to set up his voice for the interview, "I'm the guy who created this thing, and it just took me an hour to get this working." There was an audience of a little more than 20 avatars. 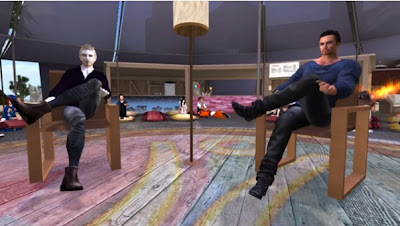 Rosedale told Emcee that he continued to be inspired by Second Life's community. Emcee brought up a quote by Steve Jobs about present day computer technologies being obsolete in ten years, and Rosedale commented with that in mind, "Second Life has fared fairly well in that reguard." The "explosion" of small handheld devices was also mentioned, Rosedale saying ten years ago this broad level of access to technology wasn't imagined.

They talked on about how virtual worlds might be in the future. Rosedale at one point mentioned a "SETI solution" to getting more processing power onto a grid, "throw the computer into a pool" for a virtual world, "we'd have a ton of computers … if we used those computers on a server network." He also brought up the gyros and sensors in today's handheld devices, and thought they would allow future virtual world users to go beyond the mouse and keyboard. He also thought there might be developments on ways to get more avatars within a region, as well as ways prove one's real-life identity, "How do you know I'm really Philip Rosedale?"

When asked what he was doing besides work on Hi-Fidelity and virtual worlds, Rosedale told he had taken up boxing, "I thought I could have an amazing experience improving myself." He talked about how "an accelerometer on your head" could be developed to help prevent injury. He also planned to be at the next Burning Man festival.

And what would he be doing in 2023? Rosedale answered that he honestly didn't truly know, though felt it was a safe answer he'd still be working on virtual worlds.

"You gotta have shoes."

Hat tip: Daniel Voyager
Posted by Bixyl Shuftan at 6:00 AM