At the sim of Book Island there’s a multitude of events for everyone. Olivia Whitsend has her "Fix 'n Flash" event while Jackson Arthur soon after has his office hours. Every Saturday at 11am SL Brokali Resident has his own event Reader’s Chat at ( http://maps.secondlife.com/secondlife/Book%20Island/192/68/26 ). 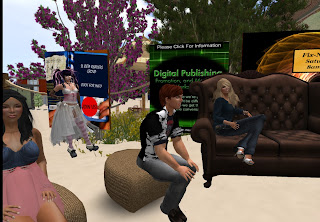 Brokali’s main topic for reader’s chat is all about books. Books that are read, books that were hated and books that people loved in his own words. Brokali leads the chat over voice chat with his charismatic voice and comments on everyone’s input into the chat.

Lycanthia Brought up a new book she just received in the mail the same day called the New Weird. The chat swung into the topic of comic books where Maggie Thunder (Maggie42) had this to say, "I learned to read reading comic books."

Comic books, I said, could be an art form as I have a few comic books myself. And some comics are graphic novels like Frank Miller’s Dark Knight. I said that the same book is realistic and could happen in the real world. Jackson Arthur said that Batman isn’t a super hero. I said to Jackson may be right, but do you really want to say that to Batman’s face? Brokali didn’t think that would be a smart idea. 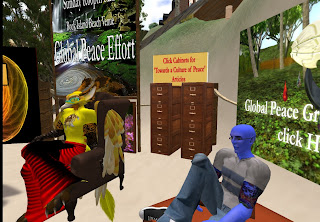 Brokali being a fan of unicorns wanted to see unicorn books in the world. We also talked about the MLP fad and Lisa Frank. I thought for a sec and remember the Last Unicorn was written by Peter S Beagle.

Then it occurred to me that a villain character of mine that I write about in my "tail sale" stories is a unicorn woman. Brokali liked how I reversed the good natured unicorn who helps people into a character who instead wants to kill and hurt others.

All in all Readers chat is a fun event to express books and comics that enriched your life as you listen to others express their fave reads as well. Whether you read a few books or a whole library of books, Reader’s Chat led by Brokali is for you.

Grease Coakes
Posted by Bixyl Shuftan at 6:01 AM