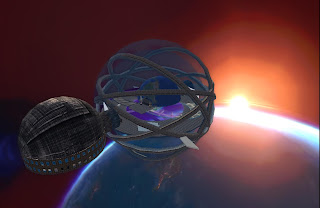 The space club Club Zero Gravity is closing it's doors to regular events, at least temporarily. Designed by Ranchan Weidman, the club was and remains a great design of a space station. But it's not without a few bugs. Over time a few regulars have commented the floor, designed to allow for quick finding of dance animations, has a tendency to hide avatar tails and parts of outfits. So Ranchan stepped forward to fix that. She also offered to renovate the overall structure, to make it seem bigger.

So for now, the "party among the stars" has turned out the lights. But only temporarily. The renovations should take just a few weeks. In the meantime, the beach club down below in the Purrfection sim, The Happy Vixen, will be having its events a couple hours early during Zero-G's timeslot while Ranchan works. So regulars will not be missing out on the music and fun. It will simply be "planetside" at the beach instead of in space.

Club Zero Gravity is a member of the FCA club alliance, and is owned by White Vixen Enterprises.
Posted by Bixyl Shuftan at 12:01 PM