Last week, Gem Sunkiller volunteered for a "Bid Me" Relay For Life event. There had been a number of "Bid Me Bald" events this year, such as the ones for Trader Whiplash and Gina Gracemount. But Gem Sunkiller put more than her hair on the line. She would risk getting eaten alive. She stated if enough Lindens were raised, 168,000 in total, she would wear an avatar of chocolate! 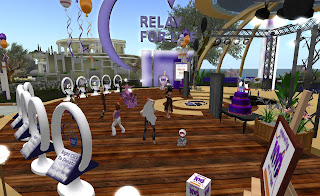 Hey Relayers! Not long ago a Challenge was laid before Koy and Mandy to raise 168,000 in order to make Gem Sunkiller wear a Chocolate Avatar for 1 week! THEY ARE SO CLOSE! 70-80K already in the Coffers and they need YOUR HELP! Tonight from 6-8 PM SLT  we will have an Open Kiosk Event at the ACS Events Area, Madonna will be there waiting to rezz Your teams Kiosk. At the end of the event all the Kiosks totals will be tallied and the amount announced. COME BRING YOUR FRIENDS AND SET GEM'S CHOCOLATE DOOM!

The event was held on June 12 at the American Cancer Society sim, starting at 6PM. Among those there were DJ Madonna and Alleara Snoodle. There were a few chocolate bar props set up. Gem had on a chocolate brown dress, in addition to Madonna wearing a fudge colored latex suit. Instead of just one event, there were a number of active kiosks taking in funds for several teams. Within a couple hours, the rest of the Lindens needed for the chocolatey dare had been raised. 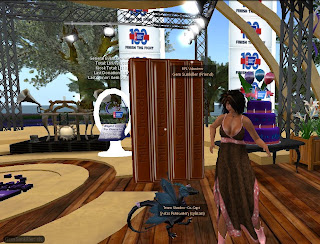 Madonna Milena: Sheriff Al is now DJ'ing here on the island. The kiosk totals still count toward Gem's chocolatey time... So come on down.. Dance with us some more.. Buy more chocolate coating - and help give cancer the boot! And if you're not yet represented in the row of kiosks, let me know and I'll rezz one for you!

The event went on for a while past the 8PM scheduled ending, with the partiers laughing and joking, in addition to dancing.

IshtarAngel Micheline took a number of pictures of the event, which can be seen on her Flickr. 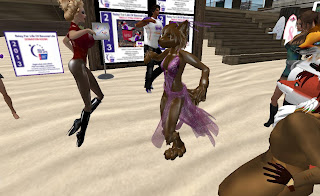 It was a couple days before Gem would get the  the avatar, a chocolate wolfgirl. It would be a couple more days until the Relay event at Arinultra Beach before I saw the avatar for myself. She joked she had gotten a wolfess and not a bunny as it could bite back anyone nibbling on her.

It was good chocolately fun in the name of rasing funds for cancer.