Sunday June 23, 2013, marked the day Second Life officially turned ten years old. It was also the last day of events at the Second Life Tenth Birthday Event, the SL10B. And going around, there were plenty of events to see and experience. 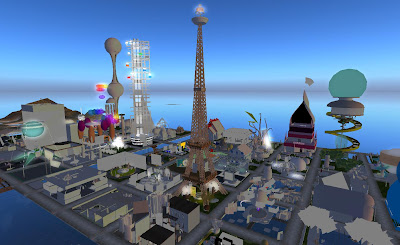 Besides the events, there were the exhibits as always, such as this Eiffel Tower build. The gray in the picture shows how bad the lag was for yours truly, even after a few minutes to settle. So I usually kept my draw distance much shorter than this picture shows. 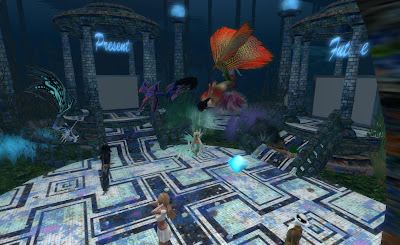 There were many parties at the four stages, and a few exhibitions. At one of the water places in SL10B Stunning, a mermaid party was held.

While there, I ran into Tantari Kim, whom was interviewed by Grease Coakes a few days ago. She told the others there about the article, and talked a little about how it was in earlier days. 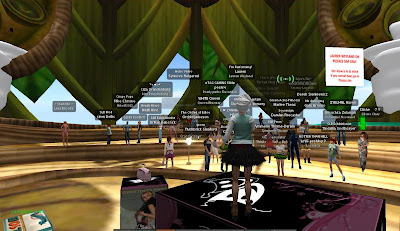 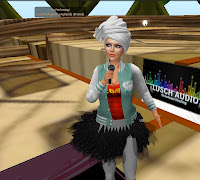 The afternoon and evening went on. Finally at 5PM SL time was the last event at the Cake Stage, a stand-up comedy session with Lauren Weyland, Second Life's most noted comedian.  It was in voice, so instead of all four corners of the stage, it could only be heard in one: SL10B Pizzaz. So all those listening were crammed there, which made it a little tricky at times to walk around as one could easily get the "lag walk" and crash.

DrFran made it over (picture above is hers). 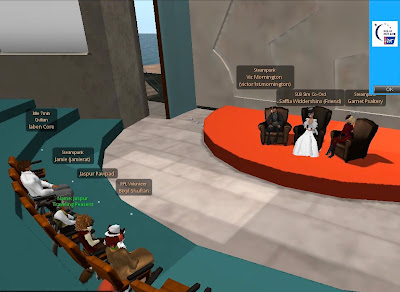 At the same time was the last event in the Auditorium, where Saffia Widdershins hosted a discussion on the Steampunk communities. Steelhead was discussed there of course. It was described as not a "hard" roleplay sim, but a social one that was kept lively by the spontaneity of it's residents. Some of their spontaneity was shown that evening as Steehead's Sakura Festival held a sumo wrestling event (more on that later). 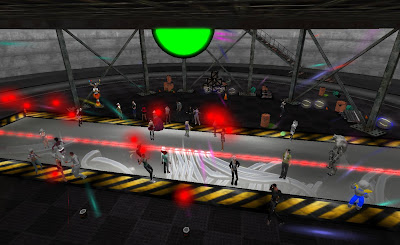 At 6PM were last of the events at the DJ stage, better known as The Reactor. Straddling two sims, SL10B Incredible and Awesome, the party lived up to the sim names, with the music and the effects of the lighting at Midnight, at least once the sims had some minutes to rezz. 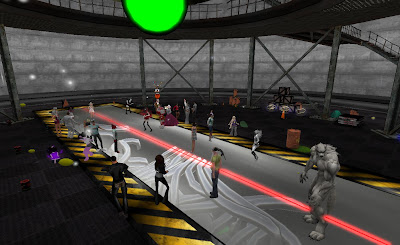 Gleanr Ellsmere was the DJ for this event. He would be followed by Ladjgirl Resident, the last DJ to officially perform at the SL10B. 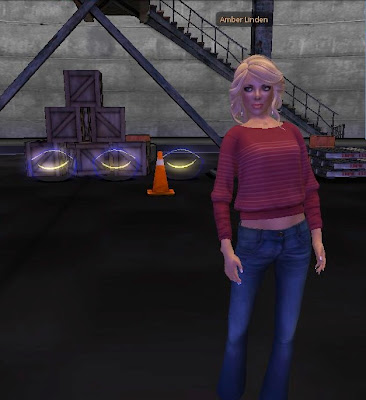 One Linden showed up for the party as well, Amber Linden. She enjoyed the bash, and upon her departure wished everyone well.

And so, the events of the Second Life Tenth Birthday came to an end. At least officially. Unofficially, exhibitors can still hold impromptu gatherings at their places. The sims themselves will still be up a few more days until Friday June 29. For exhibitors, July 1 is when things come to a close with the deadline to pick up their builds before the sims fade back to the virtual nether from whence they came.

It was an exciting SL10B.

For more pictures on SL10B, check out the Flickr page: http://www.flickr.com/groups/slcommunitycelebration/pool/.

Or you can just port to the entrance to see anything you missed: http://slurl.com/secondlife/SL10B%20Wonderous/6/93/22