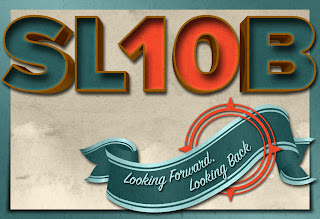 The Second Life Tenth Birthday site blog announced another contest, this one for the Time Capsule of the mega-event.

To begin with, we’re inviting residents to try to create a time capsule for this year’s event which represents either something significant which has occurred this year within Second Life (for example, SL4B’s capsule had flexis, SL5B’s used glow) or something inspired by the theme of this year’s theme Looking Forward, Looking Back

Previous examples of time capsules include a meteorite for the SL6B with it's space theme. The SL8B had "a modified version of the event logo."  SL9B's capsule was a cake.

The deadline for submissions is midnight on the 15th June.

Designs are to be submitted to Will Webb, the designated "Keeper of the Capsule." Will is also the one to ask any questions about the contest, and "previous capsules can be seen upon request."

For the complete blog post and the rules, check out the SL10B blog.
Posted by Bixyl Shuftan at 6:01 AM