Linden Lab's involvement with SL9B was very little. For SL10B, as expected the Lab is leaving the celebration event to the residents. But this time they have a gift for the residents, and a contest involving the gift, which were announced in the Linden blog entry this week: "Celebrate a Decade of Second Life." 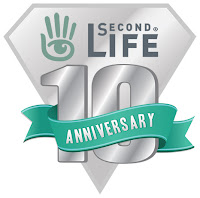 This month marks ten years since Second Life first opened to the public in June of 2003! We’re incredibly proud of Second Life’s success and longevity and we hope that all of you are too - it’s thanks to everyone who has made Second Life part of their lives over the past decade that we’ve reached this major milestone.

After the Valentine's Day blunder, one could be pardoned for thinking the Lab would be offering a paltry or unwanted gift. This time, the Lindens put a little thought, and humor, into their present for the residents. For the first eight birthdays, the Lindens offered a free teddy bear (the SL9B bear was made by Sway Dench). As it turns out, the Lab is offering an SL10B bear this year, but not a teddy bear. They're offering a bear avatar. 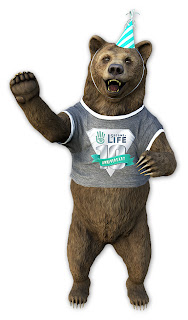 ... you can get a free, special-edition SL10B avatar on the Marketplace. This avatar is made with some of the new Materials features and will look even better once that Materials Viewer launches (you can also check it out with the Materials Beta Viewer). Visit the SL10B Marketplace and get your commemorative avatar today - they’ll only be available until the end of June!

The past ten years have seen Bears play an important part of the Second Life experience. To pay homage and celebrate the history of this noble animal, we have created a limited edition SL10B Bear avatar that comes ready to have a good time!

The avatar is no teddy. It's a realistic-looking bear with teeth and claws. So did this ursine end up bombing? On the contrary, it's proven to be a hit with residents. The Marketplace page was offering one positive review after another, "Love the bear!" "Awesome!" "This bear changes accordingly with any shape you put on without glitching out."  "I have looked and bought most bear avatars and I can say this is one of the best I have seen so far, that it's free is great and the clothes are a separate option I like better." 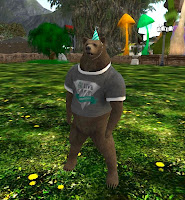 Among those commenting was personality Crap Mariner, whom reacted by creating a Flickr page inviting people to add bear pictures to it, "Looking forward to seeing what fun folks have with it." And so far he's had a good response, with a number of people sending numerous picture of the avatar, often having fun. There were a couple of bears with guns (bear-ing arms?).

While not a complaint, there were a number of residents whom wished a female bear was available. SL reporter DrFran Babcock had a response of sorts by dolling up her bear av. 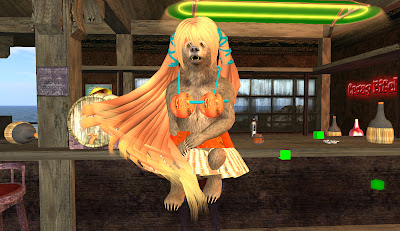 Besides the bear avatar, Linden Lab it also having a contest based on it.

The Lindens are offering a few other presents, baseball caps and T-shirts, both regular and mesh. But it's the bear that steals the show.

For the first time in two years, Linden Lab is getting some birthday cheers from the residents as they happily accept their present and aren't "em-bear-essed" to show their praise.

To get to the SL10B Bear on Marketplace, Click Here.