I was recently contacted by Mysti77, who invited me to take a look at her sim. She had something out of the ordinary for Second Life: a campground. Mysti was the owner of "King Izzy's Camping Adventure" at the Salty Sands sim. The place gets it's name from KingIzzy, her partner. 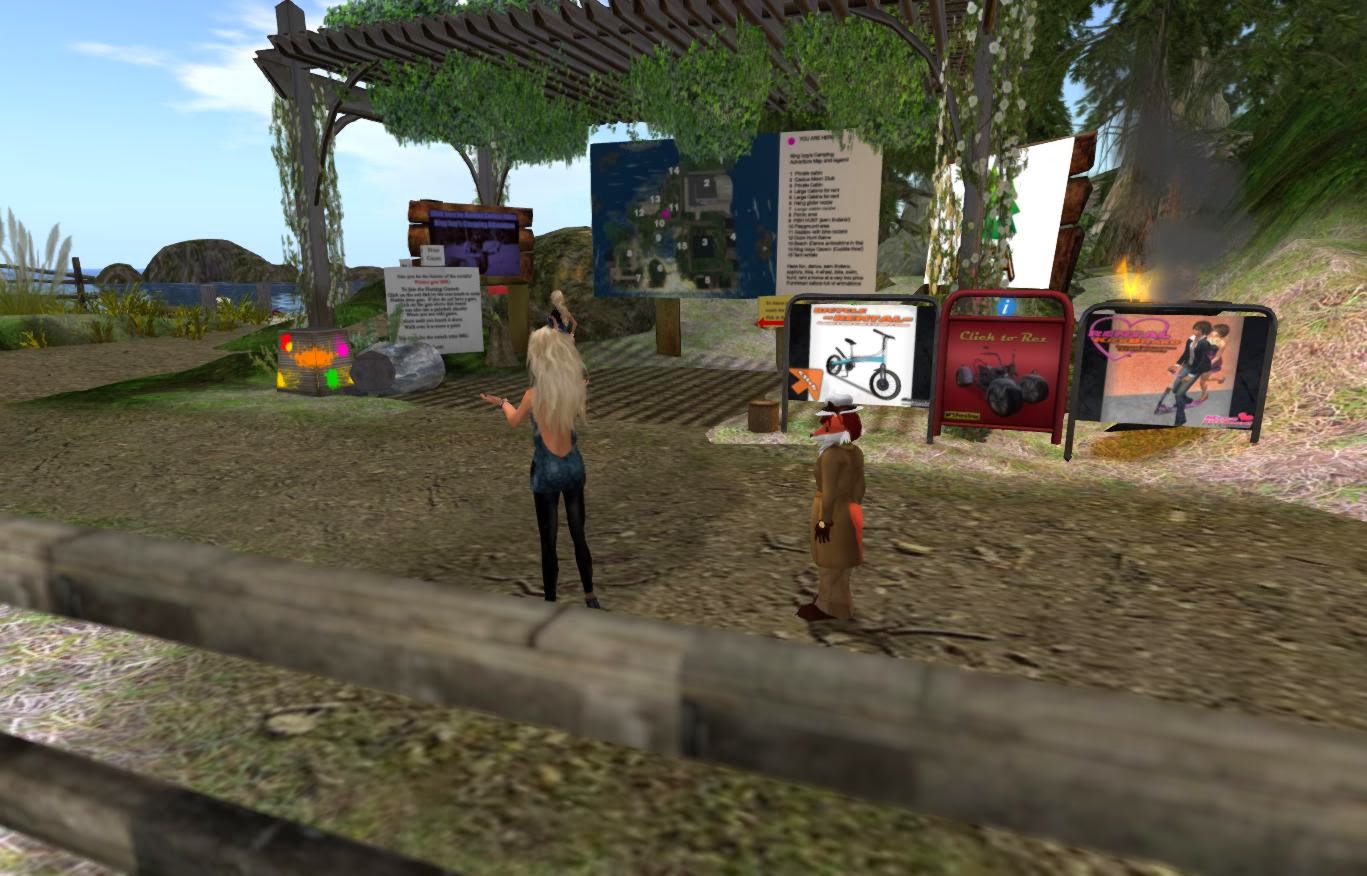 Accepting her teleport request, I arrived, and was surprised to hear the roar of a cougar leaping at me, which I dodged. "Hi Bix - look out!" Mysti shouted, "This wildcat is trying to bite you!" Fortunately I managed to slip away from it. Then a bear appeared near Mysti, but made no aggressive moves. "Do I need a gun or a bat?" I asked Mysti. She laughed, "That's part of the hunting contest, wildcats, bears, things like that. You could win 500L if you are the top hunter of the month. Monthly contest." Then we saw a deer appear beside us. With a grin, I remarked, "Well, guess the buck really did stop here." Mysti had a good laugh, "Hahahaha!" One joins the hunting by clicking on the stump next to the rules about it, "Any Second Life gun will do. But, if they don't have a gun or can't afford one, there is a free gun giver about the instruction sign. If they don't like guns, they can use a paintball gun." She explained there were some SL kids who like to camp, and she didn't like the idea of mixing kids with firearms. 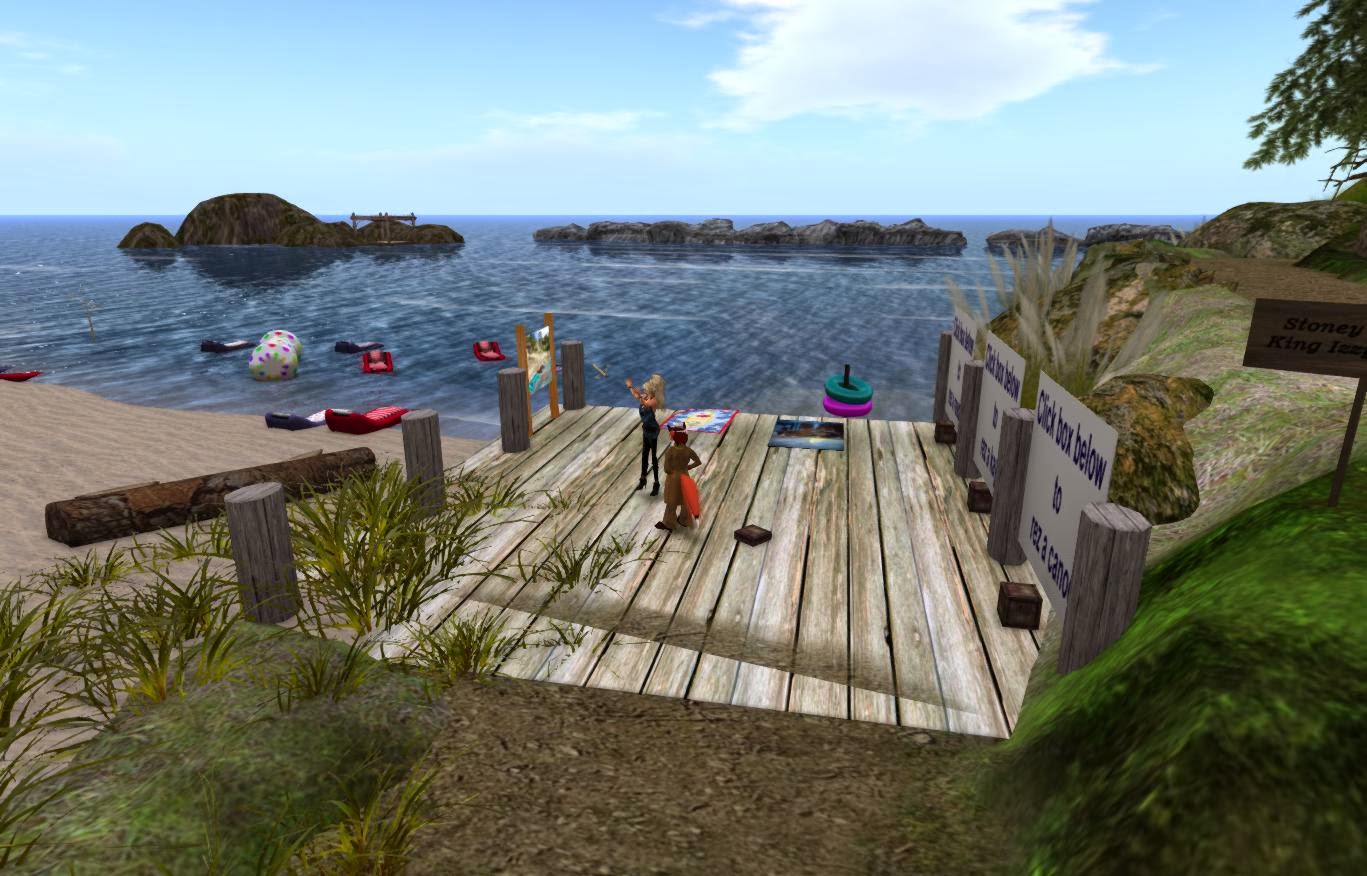 The campground had more to offer than just hunting, "We have 4-wheelers, biking, hiking, fishing, row boats, kayaing, canoeing and even hang gliding. ... We have a beach too and paintball. ... And we offer cabins or campsite to rent for taking vacations." Renting a cabin for a week costs 250 Lindens, and you're able to place up to fifty prims worth of objects there, "All cabins are fully furnished." There are also campsites one can rent for fifteen Lindens a day, and can rezz about five prims worth of objects, "like a cooler or something small. The campsites have everything they need already." She told me one could stay at a cabin for as long as they wanted as long as they kept paying the rent.

Mysti showed me the boating area, a pier next to a beach where one could rezz a canoe, kayak, or rowboat, "and we have inner tubes and bumper boats." Besides the hunting game I encountered at the start, there was also a duck hunting area in the northwest part of the campground. One can hear the quackers before seeing them, swimming from a bush in the water. There was also a playground and picnic area, "This is a community area. Families have picnics here." There was a climbable rope "net," as well as swings, and a pile of leaves one can jump around in. Just walking through it rustles up a few stray leaves. 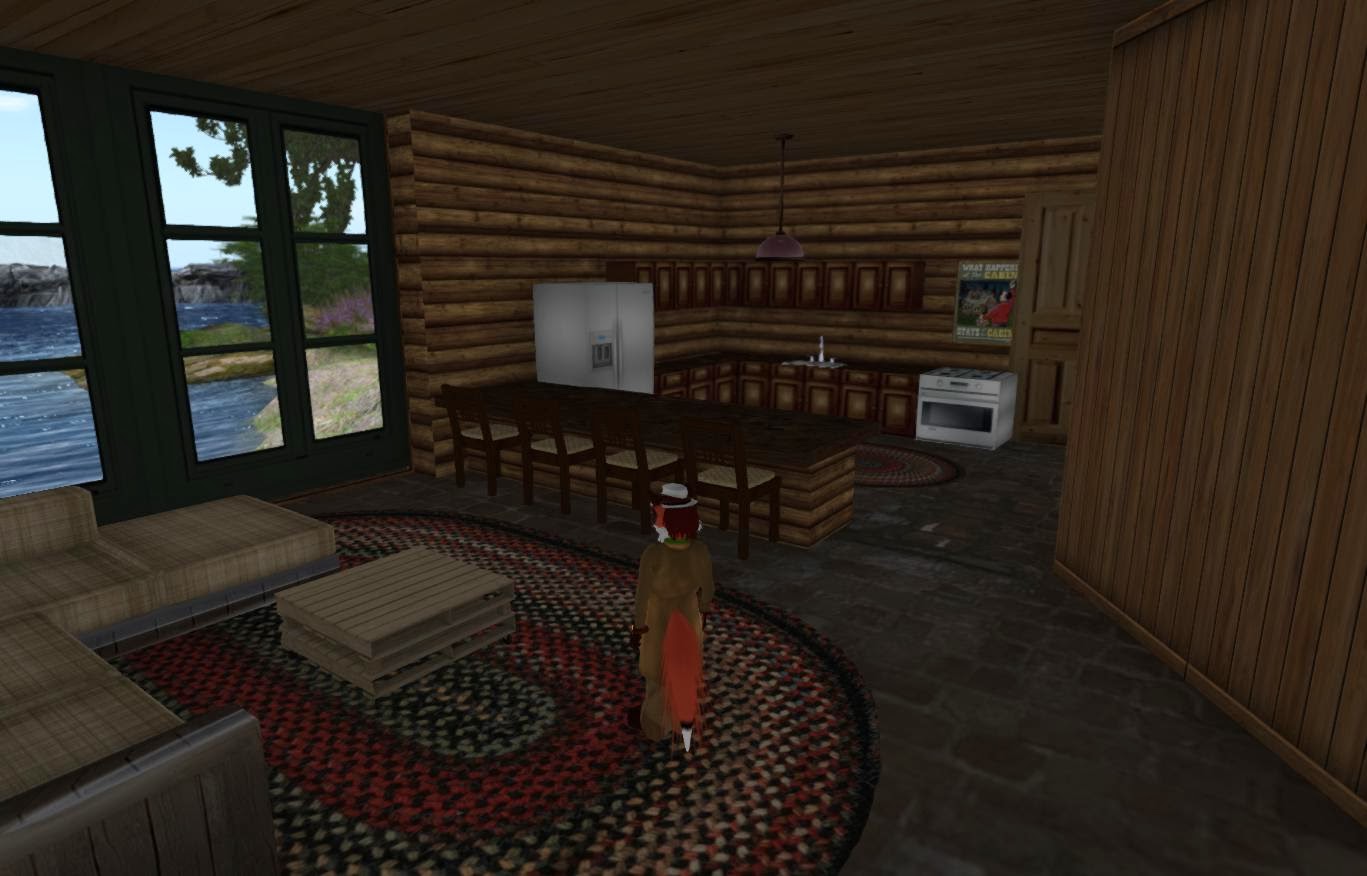 Mysti then took me to one of the cabins. This particular one had three main rooms, a living room with a couch and a "table" made from wooden pallets, a kitchen with a stove and refrigerator as well as a sink, and a bedroom. "We can add different beds for families," she told me, "or sleeping bags if they prefer."

Next was the largest building at the campground, their music club "Club Izzy." Mysti called it a "small club," though being in a wilderness area made it look a bit large. It was a bit dark inside as there was no party, but one could see music and band posters on the wall, as well as an American flag, plus a bar at one side where one could get a beer. Mysti explained they hadn't used the place much, and were thinking about remodeling it into an outdoor style club. It is currently, and will be after remodeling as well, available for weddings and private parties.

Before the campground, Mysti told me she and her friends were DJs. She explained her SL grandaughter Jules Fetuccio was the one who built the sim, "She did it for the family and now we decided to open it up to the public. It was started about a year ago and just finished last month." Designing the place took time, "Jules wanted to have everything perfect so people could experience a camping vacation in Second Life."

Lastly, I took a look at the "fishing hole" as Mysti called it. Mysti sat down at one of the chairs and took out a rod and reel, giggling, "I fish while I work in real life," saying she was lucky to have a job where she could do that. This wasn't the fishing game I'd seen in other places in Second Life, but something different, Fish Hunt. Mysti explained, "You earn Lindens and experience points doing this." People could start off with a free fishing rod, "You can get one off the marketplace, just look up 'Fish Hunt.' And it's always better to invest in some worms," she gestured to four crates of worms behind her, Small, Tasty, Enchanted, and Magic, "You'll catch bigger fish and get more Linden per fish." 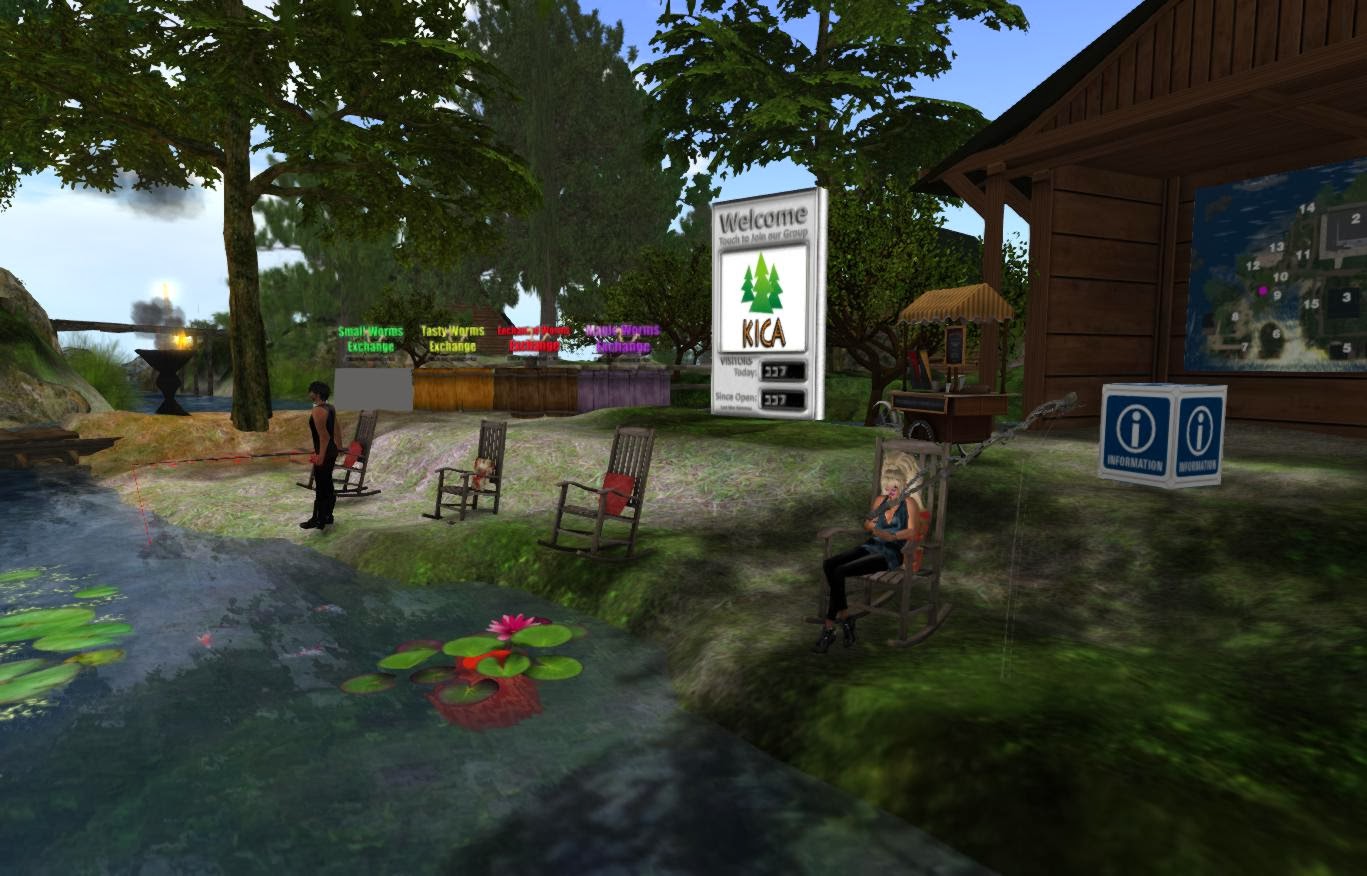 It was there I ran into Jules. Talking to her, Jules explained it had been fun building the campground, "This sim is my first big build so it's been a work in progress. I've been with Mysti and Izzy for five years this year in their family, so it has been a labor of love for them." Building the place, the club and the overall landscaping her favorite parts. The trickiest part was the trails, "They were the hardest part for me to lay out on the sim with all the hills and turns." Another spot she enjoyed creating was a small pond and waterfall near one of the cabins for rent. Jules also took the time to iron out some bugs, some more amusing than others, "I was trying to adjust the kitchen in those little cabins and I ended up outside the window with my arms folded on the sill. I looked like a peeping tom," she chuckled, "Took me a while to figure out how that happened."

They did have some special holiday events. In October, they had the fishing hole full of zombies. Also, "everyone loved the decorations as well at Christmas. We had a huge fish hunt event that lasted for hours and many DJs providing entertainment and music."

There are some plans for the future besides remodeling the club. Jules stated, "I've been thinking about putting in some skyboxes for the renters to have their privacy. Just a place to get away for private moments, you know." "This is a family/kid friendly sim," Mysti explained, "so those things must be kept in strict privacy."

"We plan on doing more events very soon," Mysti informed, "Another fishing tourney and maybe some kind of a contest or something. ... We were thinking of having a King Izzy's Camper of the month contest." She added they still need to work out the details for it.

Jules was proud of what they had accomplished,"I think we've put in just about every recreational feature we could find for the sim also so I don't see anyone getting bored here."

So for a fun camping experience, head on over to "King Izzy's Camping Adventure."

"People need to take a break from the ordinary in their Second Lives for a while and take a vacation."