I recently had the chance to visit Gull’s Wing Sailing Club, which is Second Life’s newest private sailing community.   Located at Gull's Wing Sailing Club, JadeSnake Island (47, 205, 22), Gull’s Wing is a beautiful mix of private residences and open water.   It is one of the most serene and picturesque communities in SL.   The community spans four private sims, with shared access to three others.   Gull’s Wing is limited to sailboats, kayaks, canoes, and small motor boats.  There are no noisy airplanes allowed.   Best of all, there are over five sims of open water and no ban lines! 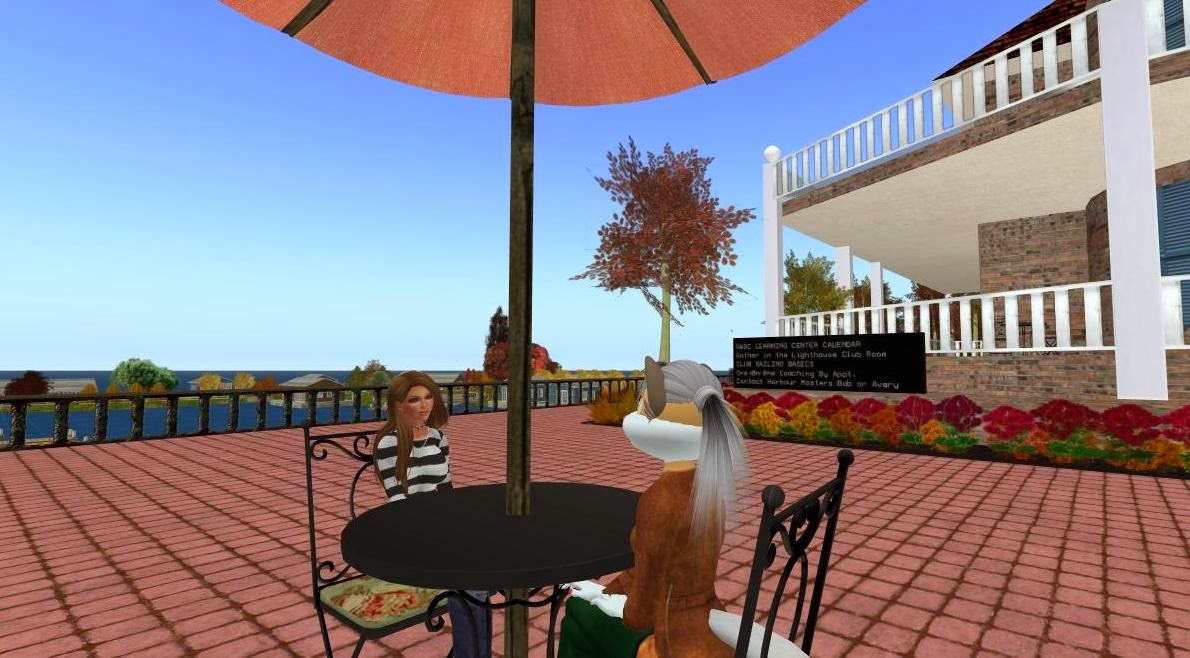 The creators of Gull’s Wing are well known to many Second Life residents.  Dearest Myrtle and Toby Howton operate ArchiTech Designs (AD) and Toby’s Juke Joint.  They are joined in this new venture by Avery Saxena and Bob (Unclesamoriginal), who are the Harbor Masters.  They are all dedicated to helping residents have the best possible experience in their new club.  I had some issues due to SL hiccups, but both Avery and Bob were very supportive and patient. They even gave me a personal tour on Bob’s sailboat. Bob and Avery live on-site, too, so they are personally interested in maintaining the quality of this up-scale, private club.


The landscaping, for which AD is well known, is beautiful.  Currently the site is in autumn colors, and they plan to do seasonal changes for spring and summer.  The land gently rolls and offers plenty of parks, trails, and picnic areas.  There are many coves and inlets to sail and explore, waterfalls and ponds to enjoy, and nautical themed shopping is planned.  Bob also plans to set up a 7Seas fishing area soon. 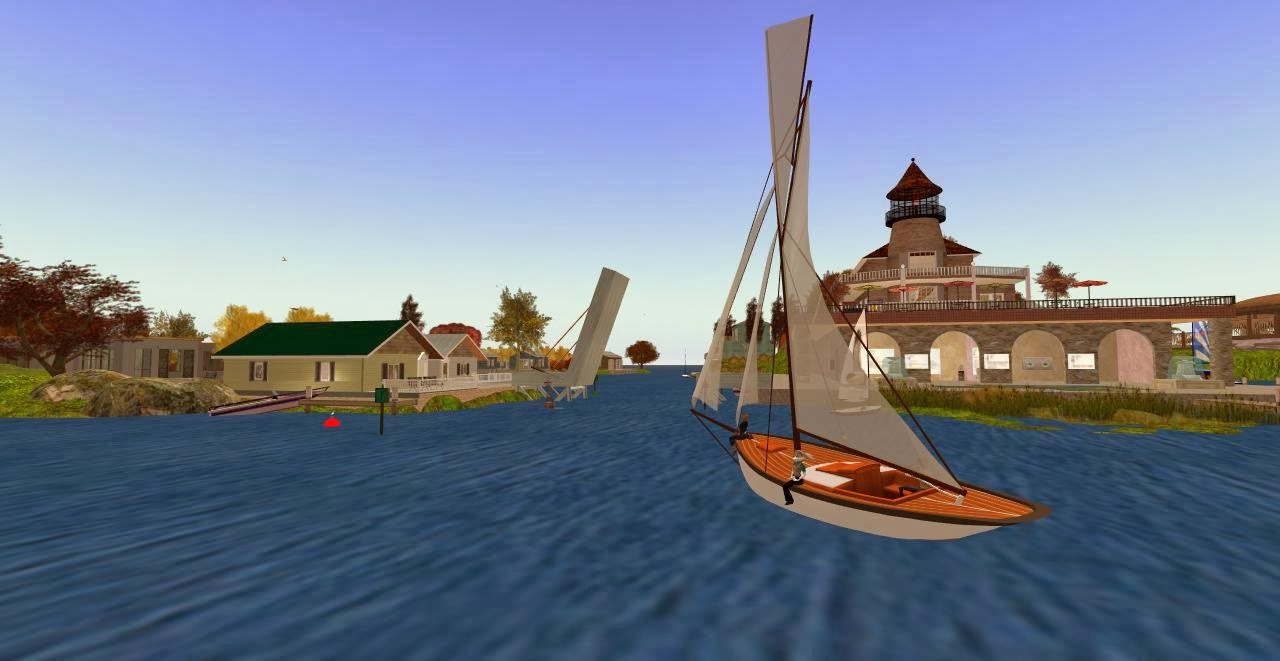 At the entrance to Gull’s Wing is a beautiful lighthouse that serves as a welcome center for visitors as well as a meeting place for residents.  Currently on the ground floor there is information about living and sailing opportunities and an office area for the Harbor Master.   You can even pick up a free Nemo sailboat here.


Inside the lighthouse there are areas for events, a bar and dance club, and a Greedy game.  My favorite area was the wrap-around deck on the second level.  I met a few of the residents here.  Surrounded by beautiful flowers, we enjoyed a glass of wine and a great view of the water while we chatted.


I learned that Gull’s Wing has three types of membership: Day Sailor, Live Aboard Sailor, and Resident Sailor.   For less than the cost of a cup of coffee in real life, a Day Sailor can rez his or her boat and sail on Gulls Wing Harbour, Owls Cove, half of JadeSnake Island, and across waters owned by ArchiTech Design, Crossworlds Sound, and into and around Toby’s Juke Joint for an entire week.


One of the best ways to get to know an area is to talk to the people who frequent it.  I was able to chat with two members of the sailing club, Jez Feral and Sydney Mantell.  Jez, who has been a Second Life resident for a year, rents a dock here.   She told me she thought she was going to have to give up sailing when she and her partner moved into a non-sailing community.   Fortunately she found out about the opening of Gull’s Wing Sailing Community.

“It was Kismet....I had just planned on packing up the sail boats,” Jez said.  “And just a day after we moved, I got notice from Toby and Dearest and Bob and Avery that they were doing this sailing sim.”  Smiling, she added, “It was perfect timing.  In fact, so well timed that I had to think it was meant to be.  I wanted to be able to continue to sail.  So we have a home elsewhere, and I can come here to sail.”


Although she says she isn’t a “serious” sailor, Jez owns a lot of sailboats.   She’s even thinking of getting another, even faster one, because she likes sailing here so much.     When I asked her what she likes best about Gull’s Wing, she said the open water that is barrier-free.


“I used to get hung up on property barriers and sim crossings on the other sailing sims,” Jez said, “so it made it really hard to let the sails out and fly.”  Although she also enjoys the ambiance here, especially the sounds of the water and the gulls, she likes the space the best.  “I really haven't seen another sim with so much room to sail, and that's a treat.”


Residents who want to be able to walk outside their door and onto their boat will want to check out the cottages.  There are over 30 cottages for rent in three sizes and price ranges and in different locales.   Residents who like quiet, private spots will want a cottage tucked away in a cove.  Second Life residents who like action and visiting with neighbors can find cottages that are set in the heart of the community.   There is something for every taste and pocketbook.  All of the cottages, however, are located on the water and include a boat dock. 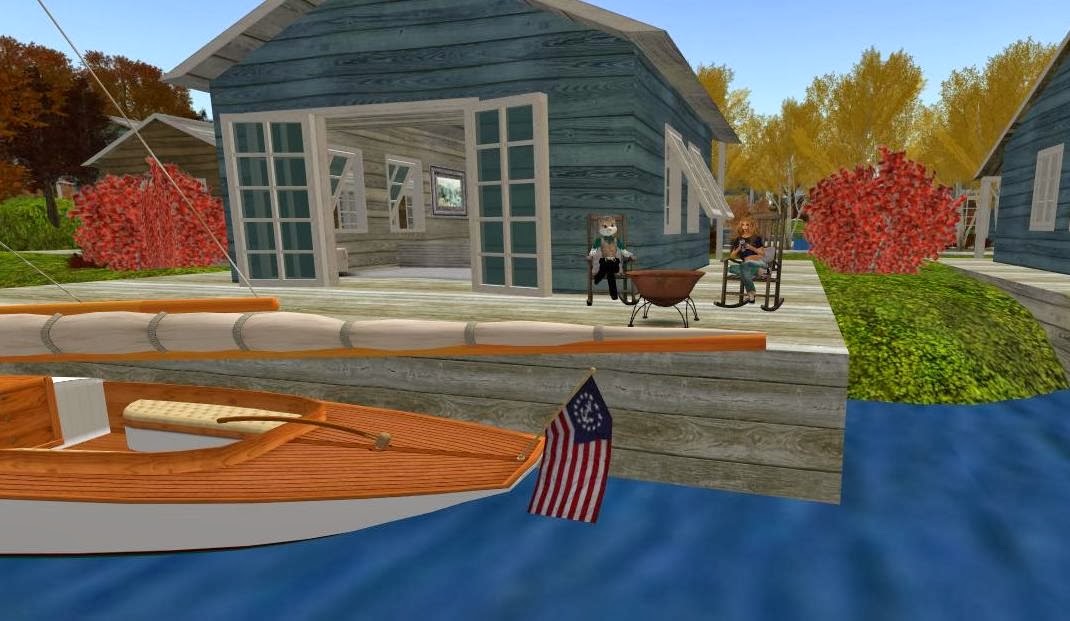 Sydney Mantell invited me over to see her cottage.   She has a great view of the sunrise from her dock.   As we relaxed in her rocking chairs, we enjoyed the great view and talked about her experiences here.   She has lived in other sailing communities, but she chose to move to Gull’s Wing because of its owners.  “I knew the esthetics would be perfect - with Toby and Dearest it was guaranteed to be lovely,” she said.   She noted that she likes the New England look of the community.


“Secondly,” she said, “I love Toby's Juke Joint.”  Laughing, she added, “And I like being in the area to see who comes and goes because I'm nosy!”


Sydney also enjoys the outreach sailing program that Bob runs.  In addition to providing free boats, sailing lessons are offered to help new sailors.  “I think many people get stuck in 'just dancing',” Sydney said, “Helping others to get started in experiencing other areas of Second Life is a good thing.”  She told me the owners are recruiting tutors to help teach sailing. 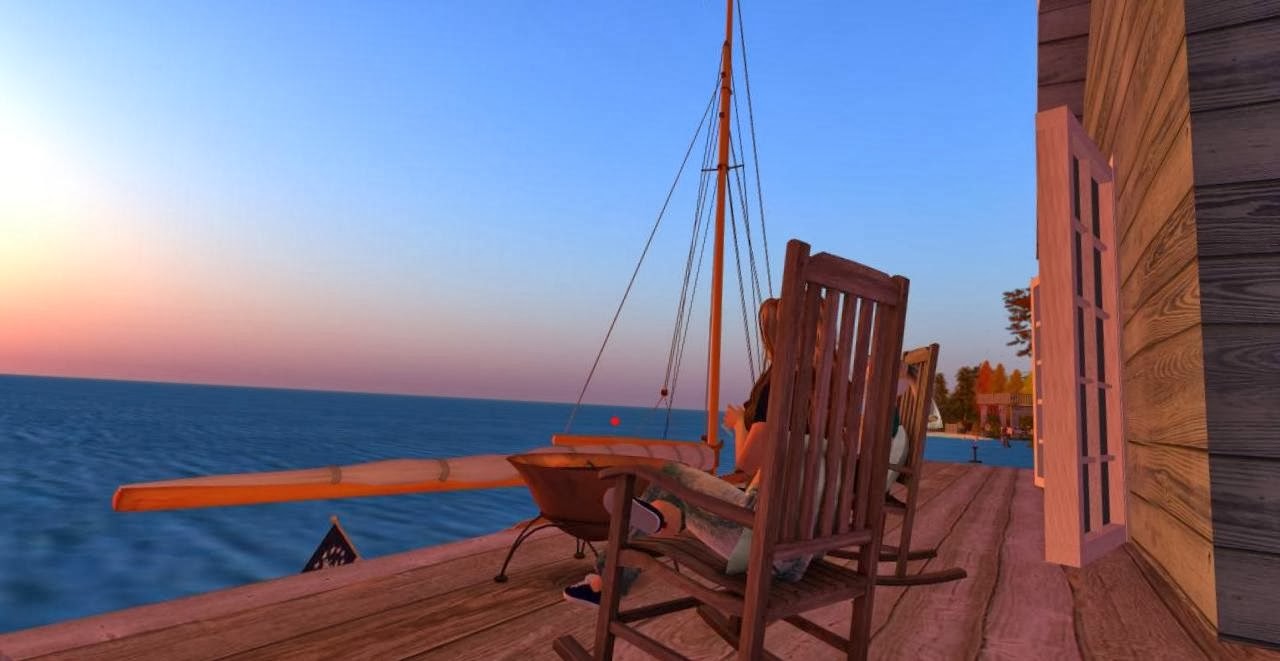 We swapped some sailing stories, including some adventures on other Second Life seas.  One of the things she likes about Gull’s Wing is that its size, while huge, is also manageable.   She can enjoy sailing and its exciting adventures yet still be able to sail back to her dock at the end of the day.


Although Gull’s Wing helps newbies, it hasn’t forgotten experienced sailors.  Racing buoys are set up for regattas, and sailors have the ability to change wind settings for added challenges.    While we were sailing with Bob, Avery pointed out that the course was designed to help you become a better sailor.  “Some parts are easy,” she said, “others more challenging.”


At the end of the day, members can enjoy a jazz club, a bar, dancing, games, and other entertainment events. Toby's Juke Joint is nearby, easily accessible by water, and it has new docks for community members.


Membership in Gull’s Wing Sailing Community is limited to 200 so that the best Second Life sailing experience can be enjoyed by its residents.  Sydney offered this advice to SL residents, “Better hurry to get here - I am sure it will fill up soon!”

Grey Lupindo
Posted by Bixyl Shuftan at 6:02 AM