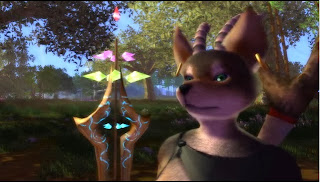 Although residents in Second Life have also been having fun with World of Warcraft, Star Wars The Old Republic, and other games, that doesn't mean they're not on the lookout for more. One game in development that caught the attention of some in Sunweaver group chats is "Antilia," a Fantasy MMO that's been in limited release alpha since 2011. Recently, Right Brain Games, the team behind the game, announced a Kickstarter to raise funds to get the game into a beta release with servers able to allow the players to access it continuously.

"Antilia is an online fantasy game built upon a lush, detailed world simulation," Jeff Leigh, the head of the development explains in the video included with the Kickstarter, "Antilia is set on the majestic planet of Forra, a world filled with elements familiar and unreal. Races and civilizations have come and gone, leaving ruins and mysteries to solve, scattered across the landscape."

In its current form, players can play characters from one of the bloodlines of the Taipii, the catlike Felo, the wolflike Lupine, the Kisan which resemble kangaroos, the deerlike Koro, and the foxlike Vulan. There are a number of options available at character creation, such as fur color. While combat is an element in the game, there's also an emphasis on crafting and making things.

For more information, check out the game's website at http://antilia-game.com . The kickstarter can be found at http://www.kickstarter.com/projects/jeffleigh/antilia-a-majestic-3d-mmo . The game also has a Facebook page.