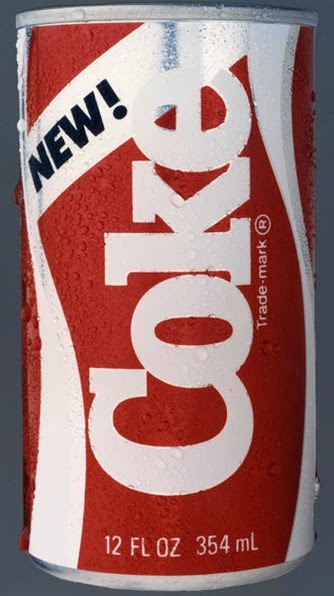 If you were around in the 1980s, you probably remember "New Coke." In April 1985, the Coca-Cola company introduced a new form of it's trademark beverage. Sales had been slowly declining. So when tasts tests concluded a sweeter tasting drink would be prefered, the company came up with one. Calling it "New Coke," they stopped selling the soda made with the old formula and began offering only their new product. The result was a fiasco, "They changed MY coke!" it's fans among the public complained. While some tried it and liked it, others did but remarked "It tastes like a bad Pepsi," and others weren't going to drink it to begin with. Sales plummeted, and in July the company brought back the old formula as "Classic Coke" (the one change from older days being corn syrup instead of more expensive cane sugar). Sales rebounded, and "New Coke" pretty much faded away.

"New Coke" was a historic corporate blunder that even the company admitted was "a day that will live in marketing infamy." Some people wondered if this was a deliberate plan to rekindle interest in Coca-Cola. Surely no corporation could be so dumb as to just up and change it's signature product and not think the public wouldn't respond.

Fast forward a few decades and to virtual worlds. For a few years, Second Life was the darling of mass media as the big thing in Internet and computers, and it boomed in terms of both users and money coming in. Then after the public spotlight faded, so did the big increases, and both population and income slowly stagnated and began a slow fall.

Although it's done better than some popular Massive Multiplayer Online Games, such as Eve Online, and much better than the second most popular open-ended virtual world, Second Life just simply hasn't truly caught on like Facebook and "World of Warcraft" have. Instead of improving customer service, Linden Lab has taken the "bells and whistles" route of trying to improve the look of the virtual experience. Many residents would say the results have been mixed, and for those with older computers having made things worse. And after eleven years of attempts to improve the initial experience for newcomers, still only a small fraction of those signing up keep showing up after their first day.

Two other issues has also been on the mind of Linden Lab, at least in more recent years: control and money. Money is always on the mind of any corporation, and the Lab has always charged for premium accounts and land. But over time the Lab has been increasingly willing to use additional means of getting it even if it annoys the customers, from the homestead "bait and switch," to the recent declaration that those making or operating "skill games" would need to pay fees. One friend whom put a few machines at her hangout for friends for entertainment, they were either free or asked only for five to ten Lindens to play, grumbled that once again the Lindens were out to squeeze a few extra bucks from it's users.

Control is another issue. At the beginning, there were relatively few restrictions on what people could do here: don't be a pest, don't plagiarize, don't make any obvious statements promoting racism or bodily harm to individuals or members of groups, etc. Then over time came more rules. The gambling and interest-bearing account bank bans early on received some protests, but were accepted as the former was illegal and the latter required licensing. But the rules and regulations continue to come, such as the requirements for third-party viewers, to last year's change in the terms of service in regards to content creators which many saw as them reserving the right to take and sell copies of what residents have made without any compensation.

Often the issues go hand in hand. Linden Lab's biggest controversy last year next to the content creator mess was their ordering all third-party Linden exchangers to close down. Although the US Department of Treasury had recently expressed interest in virtual currency, the Lab was seen as making an unnecessary and blatant power grab that would limit residents options, many overseas to options they wouldn't or couldn't use. Faced with numerous residents saying they would no longer buy Lindens, or outright quit Second Life, Linden Lab made a partial reversal, saying the exchanges could remain, but only sell Lindens. Only the Lab could buy Lindens back. While most residents were satisfied, I've run into an overseas resident or two whom stated they now have a big pile of virtual currency they can't exchange and take out of Second Life into real-life bank accounts.

Still, it was an example of residents getting the Lab to back down. An example of them "getting beaten at their own game by the very community they relied on," as Will Burns stated in a commentary, "You've been a very effective thorn in their side all this time ... Even when it came down to the third party viewers, they were outmatched." While a new grid would reap the benefits of new technology, Burns felt the big reason was Linden Lab's desire to have as much control over it's products as it could, "They've tried (very unsuccessfully) to play in your world without your intelligence, now they're going to just make it their world, their rules, and make you sign a contract to authorize imagination."

This new grid is still in development. It hasn't even been given an official name yet, though is often nicknamed "SL 2.0" by residents. Some questions about it have been answered, such as taking our account names there (yes) and taking our items there (no). But not unlike "New Coke" a few decades ago, some residence have already decided "I'm not going to like it." Others say they'll probably give it a try, but are skeptical. That they can't take the virtual items they've invested much time and money in was a deal-breaker for some, and for others a strike against it. But Linden Lab's past performance and behavior has given others low expectations of what to expect.

So how will the new Grid be recieved? Ultimately that depends on how user friendly they make it. To paraphrase Jessica Lyon, "The idea is to make a Grid *so* good, you'd be willing to leave behind your old inventory." Most Oldbies having seen time and time again Linden Lab chose more "bells and whistles" instead of concentrating of fixing bugs and improving customer service can be forgiven with responding with a collective, "Ha!" If Viewer 2 is any guide, it's easy to imagine it difficult to use from the start, especially for oldbies. Given Linden Lab's recent moves on tightening the terms of service, one can conclude SL 2.0 being a lot less free and open than the original. Besides no third-party viewers, will users see no third party Linden exchangers and thus many overseas users finding no options to get more Lindens? Will adult-rated content be banned? Will everyone be allowed to build, or will it be limited to a small group whom have to go jump through a number of rules and regulations hoops and basically sign their rights to their goods away?

It isn't hard to imagine the new grid being a place where many things we once took for granted no longer allowed. Oldbies are not going to just up and abandon Second Life for such a place. As for newcomers, word of mouth (and mouse) is still how most new residents come to Second Life. And if they decide the new Grid is terrible, are they going to reccomened it to others? Nope. In fact, some newcomers whom find out about SL 2.0 first could end up finding about SL through those checking out the new grid, hear about the community and freedom in the older grid, and head on over. "SL 2.0" may very well have only just enough income to cover costs, or not even that.

Will Linden Lab turn off Second Life in order to force residents to Second Life? They would be quite literally be risking the future of the company as they'd be turning off the source of most of their income (at least the Coca Cola company still had Diet Coke, Dr Pepper, Sprite, and other drinks to rely on). How many companies do this, especially those that have been around for ten years? None. If Linden Lab were foolish enough to do so, the result would be a huge outcry from the residents with most refusing to use the new Grid, and it's income would sink like a rock until they relented.

Befuddled, Linden Lab will have no choice but to continue to rely upon Second Life and it's population of oldbies whom insist upon an open-ended virtual world.

"We would have gotten away with it too, if it weren't for you meddling kids and those furries!"