In a press release yesterday, Linden Lab stated that this week, they would be sending the first of their invitations for Sansar to the content creators whom applied since May. For the first time since they named what had previously been called the "Next Generation Grid" in May 2015 as "Project Sansar," Linden Lab began referring to the virtual world simply as "Sansar," dropping the "Project" part of the name.

Linden Lab® today announced that the first invitations to the Sansar™ Creator Preview are being sent this week. Select applicants will be invited to create their own social VR experiences with the new platform, slated for public release in early 2017.

It was announced that over 6500 people had applied for early access, "As the platform matures, we’ll continue inviting more and more creators up until public release early next year." Earlier this month, Ebbe Altberg, the CEO of Linden Lab, stated in an interview he expected Sansar to be ready to be fully opened to the public in January 2017.

Inara Pey noticed the change in the name, and emailed Linden Lab's Peter Gray (Peter Linden) about it. His response was simple: "Good eye." Inara commented, "The new name shouldn’t really be a surprise – after a year or so of referring to it as “project Sansar”, to the media and the VR public, changing the platform’s name to “Sansar” is a lot easier and less confusing than trying to effectively rebrand the platform, even if it hasn’t yet been formally launched." 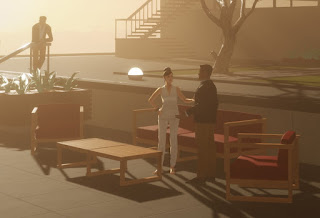 Linden Lab would also post four screenshots from Sansar onto it's Flickr account. Among the pictures was one with a few avatars, the first such screenshot they have released so far.

To view the press release in it's entirety, (Click here).