For many of us, comics are a favorite part of the newspaper. So when the Internet and World Wide Web was coming of age in the 1990s, some artists began drawing and publishing comic strips on a regular basis. Most would last only a few years before the cartoonist either ran out of ideas or real life made it too difficult to keep up his/her schedule. But others would keep going. Among one of these first online comics to gain a following was "Sabrina Online" by Eric Schwartz. Starting off with a girl connecting to the Internet, the strip went through a number of plots and tales of Sabrina and her friends.

On September 15, twenty years to the month after the comics first went up, Schwartz uploaded the last of the strips, Sabrina marrying her boyfriend, followed by a message.

'Sabrina Online' first appeared on the web on September 15, 1996. It seemed fitting to bring the strip to a close twenty years to the day later, ending with a bang (of sorts) rather than keeping the strip plodding along month to month indefinitely without any focus or goal. I want to thank all of Sabrina's readers and fans out there, whether you've been there from the start or discovered the strip more recently. You all are the power that helped me keep the comic rolling as long as it has. While all good things must end, Sabrina, R.C., Zig Zag, Amy, and everyone else are not gone. It's only the regular monthly strip that is completed, but new stories and works from the Sabrina-verse will pop up from time to time. Just drop by for news and info, whether on this site, Furaffinity, or elsewhere. Thanks again to everyone. I can only hope you enjoyed the two-decade ride anywhere near as much as I did. 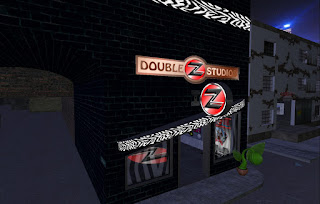 Over the years, the strip has gotten Schwartz a number of fans, inspiring a great deal of fanart and some fanfiction, and been translated into several languages. Some fans led by Cindy "Zig Zag" Babii, built in Second Life a "Double Z Studios," also called "ZZ Studios," named after the place where the title character of the comic ended up with a job as the webmaster. The place is still around today at Sheridan (64, 145, 2500).

The comic itself can be found at sabrina-online.com. Be aware that the strip rates a PG-13 as while there's almost no profanity and no real nudity, it does touch on adult topics. That the strip got a bit edgy without going past a certain boundary (much), was likely part of it's appeal, along with the quality of the art and characters.

It should be noted Schwartz stated while this is the conclusion of "Sabrina Online," he will be doing more tales later on of the characters "from time to time." So fans should be hearing more about the Amiga and Transformer loving skunkgirl soon.