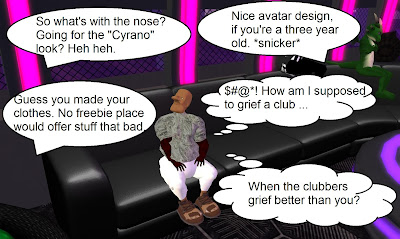 Someone once spoke about griefers, "They think they're the cleverest thing since bumper nuts, but nine times out of ten, they're the same-old, same old." One dropping by a certain club I was at was especially lame. While these weren't the exact insults tossed his way, what did get spoken was far more clever than what crudery he did.

And just why are most griefers either mishapen messes, or have something like TV set heads?